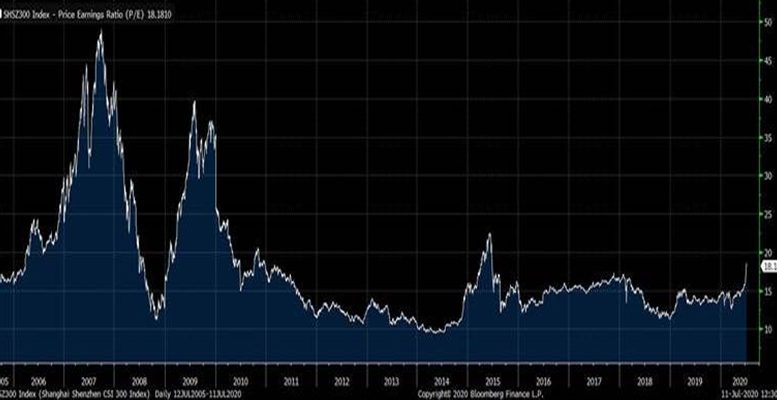 Mobin Tahir (Wisdom Tree) | The S&P China 500 Index is up 17.7% and the CSI 300 Index is up 16.8% year-to-date. The recovery in Chinese equities, following the sharp drawdown in the middle of March this year, can be broken down into three phases:

Initial recovery due to policy support: The People’s Bank of China (PBOC) responded to the economic crisis with cuts in reserve requirements and lending rates, and by introducing targeted lending to distressed sectors. This monetary lifeline was supported further by the 4 trillion yuan (US$559 billion) fiscal stimulus announced by the Chinese government in May. The tipping point: Policy firepower was in the tank, but equity markets were eagerly awaiting positive economic data as lockdown conditions were eased in China. Strong manufacturing and services Purchasing Managers Index (PMI) numbers for June released in the first week of July provided a boost to risk sentiment triggering a sharp rally. The uptick in margin trading: In China, margin trading on the stock market has a high correlation with the stock market itself. Total outstanding balance of margin transactions in China, a measure of speculative trading, has risen sharply in July propelling the rally further.

Not quite in bubble territory yet

One possible way to study stock market bubbles – if only ex-post – is to observe the surge in valuation multiples. While price-to-earnings (P/E) multiples for Chinese stocks have indeed risen in July, they remain far from alarming levels seen during previous stock market bubbles. It also does not seem unreasonable to expect earnings for Chinese businesses to improve as the economy recovers in the second half of this year. This too, could help keep valuation multiples in check.

Under a pragmatic approach, investors should maintain optimism about an improving macroeconomic outlook, but remain cognisant of the risks which may still create volatility.