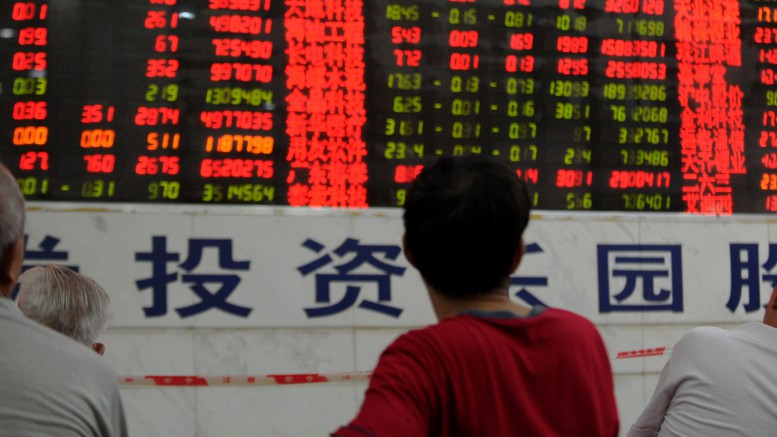 And the worst is, without a doubt, that about half of all that amount corresponds to loans granted to invest in stock market. That is, many will not be paid back and the Chinese central bank is already injecting additional liquidity to mitigate the adverse effects of another hangover.

“Shadow banks have been speculating very aggressively for a while,” says Ma Yixun from Caijing financial group. Our analyst refers to the so-called “umbrella funds” offered by unregulated entities that attract deposits to invest in equities. The problem occurs when so much money is lost since these informal lenders, mainly supported by the large commercial banking sector, cannot meet their obligations.

Bubbles in an economy with such a restricted financial system as the Chinese are quite common. However, this stock market crash is one of the most serious since Shanghai resumed its activity in 1992. The falls, at the time of writing, already exceed 30%. And the fear of systemic risk is something that may be felt across the board.

A few weeks ago, a Beijinger friend asked me if foreign countries were talking about the stock market crash in China. Another friend posted on his social media some photos taken during a conference on systemic crisis which we had both attended three months earlier. And they are not few who recognise, resignedly, that they have  lost all the profits made over the spectacular rises recorded prior to the crash. Putting everything in context, the Chinese stock market soared by 238% in the last 12 months.

The problem is not these sharp fluctuations, as Caixin magazine reported recently- what is really serious is that €500 billion have been lent in just one year in order to inflate the markets. If economic fundamentals have not changed substantially and there is so much volatility, it means that someone is doing his job badly. And all eyes, of course, point directly to the banking regulator.

Shadow banking, mainly responsible for this last stock market bubble in China, was already gaining attention for unpaid real estate loans. And now it is under the spotlight again for having flooded the stock markets with highly speculative money. While Chinese savers cannot get their money out of the country and continue to receive low interest on their deposits, they will make high-risk investments in sectors that are prone to generate stock market and real estate bubbles. Moreover, they will keep doing it off the regulators’ radar. And this naturally raises many doubts about the credibility of the Chinese financial system.

How many credits have been extended so far under the scheme of shadow banking? Is there systemic risk of collapse? These questions are key, as well as guessing whether the newly burst stock market bubble may have some effect at the macroeconomic level. China’s opaque shadow banking, according to the latest estimates published by JP Morgan, is around 70% of GDP. It doesn’t seem an excessively high figure, especially in comparison with other economic powers like the US or UK, nor are all loans granted in this way at risk of being unpaid. China also has enough artillery to stop much of the turbulence that may arise from shadow banking. For example, here there are deposits equivalent to the entire US GDP, which cannot leave the country. Precisely due to the existing capital controls, China can also practise an expansionary monetary policy without worrying about the flight of foreign capital or the exchange rate. All these resources seem, therefore, enough to cover relatively large banking deficits, to stabilise the stock markets or, if necessary, to do both at the same time.

China’s stock market, unlike other markets, rarely responds to economic fundamentals. It represents only a fifth of the financial system, which remains dominated by five large state banks that were already recapitalised without hesitation two decades ago, when arrears shot up to 25%. Foreign capital flows, also for investing in the stock markets, are restricted to the maximum. And an alleged poverty effect, or less consumption due to the current market crash, is not something that will have a significant reflection on upcoming GDP data.

Recent stock market declines only worry for the effect they may have on a financial sector which shadow banking is practically unknown. It is simply fear derived from uncertainty. The central bank and Chinese investors fear that those out of control balances may threaten the viability of China’s financial system some day. It is still unlikely that shadow banking can knock down the all-powerful Chinese economic and monetary authorities. But this last bubble, or the sharp rises in the interbank rate experienced two summers ago, we should consider as early warnings of a real threat.

Be the first to comment on "The umpteenth Chinese bubble"