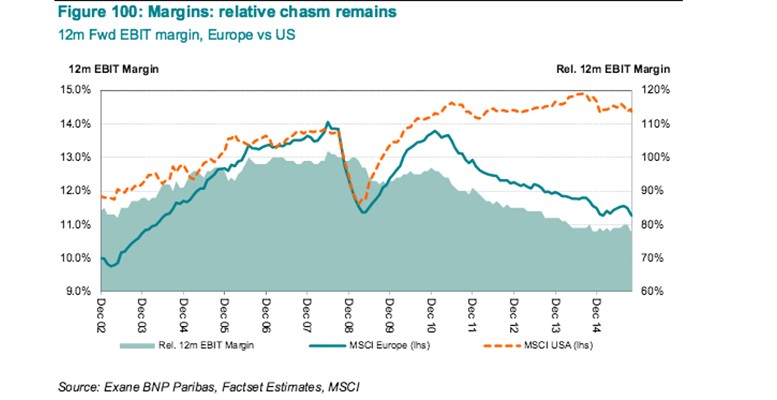 The major economies are now characterised by desynchronised economic cycles, with divergent policy regimes. This complicates the equity investment decision. Europe may be a relative winner, but too much of the globe is seeing financial conditions tighten, against lacklustre growth, to be optimistic on directional trends. We see downside risk through the opening months of 2016. The European economy is moving in the right direction and further ECB action promises to again ease financial conditions. Meanwhile, US macro resilience has long been the consensus default assumption. But US financial conditions are tightening and the rate cycle looms.

As we are clear on our investment thesis for Europe, it is the US which warrants more attention. US earnings growth is now expected to be -0.2% in 2015, having started the year with hopes of 7.7% progression. This is a common trend, both historically and in other regions (e.g. Europe started at 16.4% and now sits at 12.1%). We show the US EPS worm evolution.

Indeed for many sectors, such as Insurance and Consumer Staples, US analysts have pencilled in 2016 EPS growth rates almost identical to those they had for 2015 at the start of this year.

While this is far from a US-only phenomenon, in Europe there does seem less of a reliance on those sectors which have se en heavy downgrades to bounce back. See below.

Not a reassuring picture of 2016 earnings growth in either market…

While not wishing to unduly bang a bearish drum, we do have to say that the weighted contribution of EPS growth by sector raises a few concerns in both Europe and the US. While Pharma features as a growth driver in both, Industrials, Consumer Staples, Banks and Oil & Gas are more worrisome.

How certain is this growth?

The standard deviation of estimates for the key US sectors is 36% above the US average, whereas in Europe the variation is 17% lower.

Delving a little more into comparisons of some of the key sectors is also interesting.  While there are some notable differences on composition (the US having more high-marg in biotech names) the trajectories are notably different.

There is a similar picture for Retail (the sec ond biggest contributor of US growth), with both Food and General Retail margins at relative highs vs Europe. We show the chart for Food Retail below.

We also note that a major driver of US Retail EPS growth is Amazon where EBIT and EPS is forecast to increase +81%. However, while there is an excellent chance Amazon grows its profit strongl y from its current 3% margin, the standard deviation of 31% on consensus EBIT speaks to the low vi sibility on profits from such a top-line driven business.

From a top-down perspective Europe also feels more comfortable. The well-worn chart below showing Europe’s still depressed margin at all-time relative lows to the US (as the US labour market tightens further) remains valid.

We’d add that our concerns over tightening financial conditions in the US and higher financing costs to corporates carries risk to the net profit line and to share buybacks. What about the political outlook?

While the US election itself is not unt il Q416, the primary process and election campaign is likely to be a huge media focus throughout the year with the potential to impact financial markets. The key hard dates are as follows:

– Presidential election Nov 8 th So who is likely to win the nomination? Though not quite a foregone conclusion, Hillary Clinton looks the overwhelming favourite to top the Democrat card. The Republican nomination looks less clear-cut with Donald Trump’s poll leadership being increasingly challenged by Ben Carson in recent weeks (with Carson ahead in some polls).

Rubio current favourite It’s also worth noting the big difference in the betting markets. Following a September Republican TV debate, the odds on Marco Rubio winning the nomination have shortened significantly. Rubio is currently priced at 7/2 with William Hill to be the next president, with Trump at 11/2, Bush at 14/1, and Ben Carson at 16/1. The CNN political prediction market (which factors in polls, users online predictions and other factors) also gives Rubio a 33% chance of winning, with Trump and Carson at 17% each. For reference Hillary Clinton is 4/5 to win (i.e. a c.60% chance) with William Hill.

What are the candidates’ policies?

As we are the ‘primary’ phase of the camp aign, the candidates may be playing to the party base (as opposed to the centre) in terms of policy commitments so far. With this in mind we set out some of the key policy pledges.

Aside from the more predictable differences between left and right in terms of government spending and general ‘business- friendliness’ which intuitively (but not necessarily) sees markets favouring a Republican win, there are a number of points above worth dwelling on.

a) To the outside observer, Hillary Clinton and Marco Rubio would appear to have the most ‘mainstream’ and potentially least divisive policy sets at the macro level and thus be a benign outcome for markets. However, in Clinton’s case there are some policies with specific potential implications such as:

2) Raising the minimum wage may increase pressure on margins for labour- intensive industries.

3) The focus on drug pricing is a potential concern for Pharma (though such pledges have been made before and medical R&D is also a Clinton campaign pledge).

4) Taxing high-frequency trading and closing the Volcker ‘loophole’ may cause disruption to parts of the banking industry. While he is behind in the polls, a Rubio victory may be the most welcome outcome for markets with promised tax cuts and pro-enterprise policies. His energy and defence policies could also have material implications for those sectors.

b) A victory for Bernie Sanders would be a bad outcome for markets with the focus on rebuilding trade barriers and generally anti-business tone. Based on polling this seems an unlikely event.

c) Donald Trump’ s radical proposed tax code changes may be welcomed despite the forced repatriation of cash (or forced fee to be more precise – cash deemed necessary can be left abroad) primarily due to the cut in corporation tax. However given the perception of Mr Trump in the media as a di visive candidate it seems quite likely the market would worry about the stability and pr edictability of a Trump-led administration. Perceptions can change of course, but a Trump nomination (and especially any subsequent polls showing a reasonable chanc e of a presidential win) may be taken with nervousness.

d) Ben Carson currently carries some traditional conservative US causes such as a hawkish defence policy and a pro-life stance. However it is his fiscal conservatism which could appeal to markets with a plan to revise the tax code. His defence policies could have important implications for rela ted sectors also. After Marco Rubio and Hillary Clinton, Mr Carson seems like the most benign outcome for equity markets. We also note that both leading candidates promise tax cuts for middle-class / working families.

At this early stage this looks difficult to call. Depending on the permutations of who wins the 2 primaries the polls show different results. It’s almost a year until the election (Nov 8 th 2016) and the public perception of the candidates can ebb and flow, not to mention the state-by-state dynamics that can tip th e balance in a close contest. However, on current polling a Clinton-led Democrat card would possibly win over a Trump Republican offer but looks much less certain against Carson or Rubio. We show polls for Clinton vs Trump and vs Carson below (where recent Clinton vs Rubio polling looks similar to Carson).

Providing Clinton’s large lead in the polls remains, the main risk on the primaries during H1 is the Republican nomination.

– A likely Trump nomination win (with close-looking presidential polls) may provoke some nervousness.

– A Rubio nomination win (with close-looking presidential polls) could be taken positively by markets.

– The focus then clearly shifts from June into which of the two candidates will win.

Trading Patterns around US elections

Each election is different, but what d oes history tell us about equity market performance in this phase of the political cycle? Looking at elections over the past 40 years we can see that on average the US has outperform ed the MSCI World index, including in 5 of the last 6 cycles.

Absolute returns have also been positive (on average) in election years with an average gain of 8% in the S&P in the 12 mo nths before an election, with most of this concentrated in the first 6 months (i.e. the primary period).There have been a number of US studies on whether elections really impact stock market performance, with no clear consensus. What is clear is that policy is influenced by the electoral cycle making less popular policies and reforms more likely earlier in presidential terms and ‘giveaways’ more likely as elections approach.

An election year can heighten the focus on specific sectors. While the stage of the economic and monetary cycle has varied over the years, looking at the median average relative performance throws up some interesting results. While we can’t claim to have anything more than speculative explanations as to why, Real Estate and Banks have generally outperformed through election ye ars, whereas Travel & Leisure, Media and Technology have usually fared badly.

How does this all affect our regional view of the US?

While a Clinton victory presents little obvious threat to markets, there is clearly some tail risk around the election campaign depending on which Republican wins the nomination and how they fare in the polls vs the Democrats. It would be disingenuous to suggest that Europe’s political landscape was without risk (Greece, Brexit, Portugal etc), however the 2016 political calendar looks relatively clear with elections in Spain on 20 December 2015 carrying the most uncertainty.

While we hesitate before making such a statement, 2016 looks like a rare year where the US political risk (while still relatively low) could even turn out to be higher than in Europe.