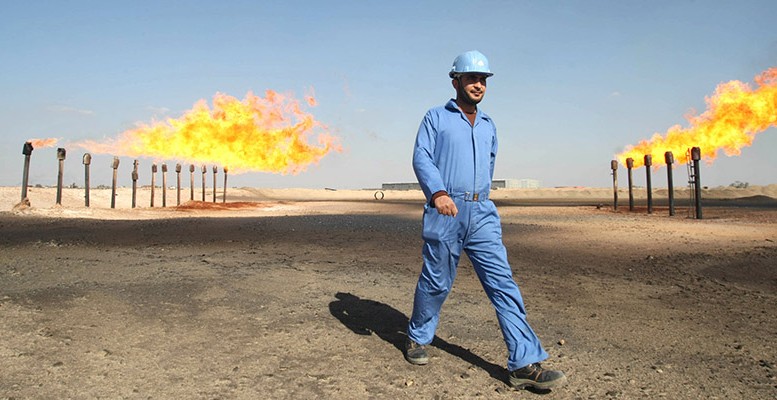 Atlantic Sentinel | Year 2003 was a different era. The US waged a war of choice in Iraq; Vladimir Putin’s Russia was seen as a paper tiger; China’s economic boom roared but didn’t threaten; Dubai was unknown; and the United States seemed like it would forever be an oil importer. Much has changed. But today, the price of oil dropped to $27 a barrel, last seen in the heady days of the first W. Bush Administration.There’s a lot going on here. Let’s get super.

First off, how did we get here?

Remember the madness of 2008 when oil hit a dizzying $140 a barrel? Back then, oil speculators pushed the price well beyond reason, then watched demand evaporate as the Great Recession took hold. But prices had been rising for good reason: a growing world economy with what many believed to be a shrinking oil supply simply meant prices would invariably rise. Basic market stuff, really.

But such sky high prices also created incentive for alternatives. People and governments scrambled: they found natural gas, fracked oil and green technologies. Biggest boon of all was fracking, which allowed the United States to suddenly reemerge as an oil superpower in 2013.

This scared the Saudis and their allies something fierce. Saudi Arabia once viewed oil as a weapon and used it accordingly against the West following the 1973 Arab-Israeli war. But rather than spur the West to abandon Israel, it forced Western states, led by the US, to find alternatives: nuclear, solar and wind. This panicked the Saudis who understood that the West could, if given enough time and market incentive, find a permanent replacement for Arab oil.

From then on, Saudi Arabia and its allies in the Gulf Cooperation Council tailored oil policy more finely. Oil had to remain cheap enough to keep the West addicted while still allowing the GCC the cash to develop at a pace acceptable to its citizens.

This was why even during the Tanker War, when Iraq and Iran took to shooting one another’s oil tankers, oil remained cheap: Saudi Arabia was determined. Despite disasters like Saddam Hussein’s destruction of Kuwait’s oil industry, Riyadh kept oil down and prevented a challenger from taking hold.

There were nice knock-on effects to this too. Cheap oil hobbled GCC foes like the Soviet Union and Iran; following the Iran-Iraq war, Iran kept its foreign adventures very limited, while the USSR went bankrupt partially because it couldn’t use its vast oil reserves to balance its books.

This state of affairs looked to continue as America’s reserves dwindled. But starting with the invasion of Iraq in 2003, oil prices began a steady climb. This came at the same time as China’s manufacturing boom.

This was tolerable because it was believed the West had no choice but to keep buying GCC oil. GCC states like the United Arab Emirates began to embark upon megalomaniac superprojects. GCC coffers swelled. The party went on from 2009 until 2014.

American oil industry investors had market incentive to finally do something about this niggling dependence on Arab oil. They dusted off fracking technology, which had been around since the 1950s but was never terribly profitable, and brought it up to speed. And suddenly the equation changed.

This was a strategic threat to the GCC. The US had finally developed a reliable alternative; left alone, it would deeply undermine Saudi energy strategy. But moreover, the world had changed much since 2003. China’s thirst for oil had slowed; Russia and Iran, both dependent on high prices to prime their economies, were propping up Syrian dictator Bashar al-Assad, much to the chagrin of the GCC and the United States. And development within the GCC meant it took a much higher threshold for oil prices for the regimes to hit their budget targets.

Still, the GCC had reserve cash. As oil prices slumped in the face of a Chinese slowdown and the fracking revolution, the GCC refused to cut production. This began a tip downwards. Russia, throttled by sanctions, couldn’t afford to cut production either. Venezuela, another key OPEC state, had its own problems and desperately needed whatever cash its inept government could get. The final straw came last week as the UN cleared Iran and the sanctions regime became slated for demolition. The price tumble makes more sense in such circumstances.

So who are the winners and losers here?

The winners are mostly the West. Even Norway, which owns large oil reserves, will weather the storm: Norwegians decided years ago to store their extra cash rather than splurge. While individual frackers will go under, the West as a whole will enjoy cheaper energy and will have fracking technology on the shelf ready to go should oil prices ever spike again. Meanwhile the West as a culture has shifted towards greener energy: cleaner air is just as much an incentive to young Westerners as avoiding putting money in the pockets of regimes like Saudi Arabia.

The losers, meanwhile, are almost uniformly illiberal oil producers, but to varying degrees

Putin’s Russia has a stronger and more diverse economy than the late Soviet Union, so low oil prices are unlikely to be fatal. But they will be a stressor that will wear down his ambitions over time. A lack of oil cash will make Putin’s cronyism all the more blatant and difficult to bribe away; it could crack the foundations for Putin’s social contract, allowing challengers to gain traction against him. It could also make Putin more reckless: should he have nothing to achieve domestically, he’ll turn outwards to win cheap victories. His victims could well include Ukraine, Georgia and Central Asia.

Venezuela is already approaching basket case levels: lowered oil prices will only accelerate that. Venezuela’s opposition has taken power in the legislature, but Caracas could face Greek-style chaos for years to come as Hugo Chávez’s successors battle it out with his foes. The good news is that all of this has remained remarkably peaceful and lower oil prices will likely only weaken the Chavistas. The bad news is that President Nicolás Maduro has incentive to, like Putin, stir up trouble abroad to save his skin.

Iran isn’t quite as in dire straights, having already been choked by years of sanctions, but the bounce back from the sanctions regime won’t be as fast as many Iranians hoped. This could well led to blowback, though it’s easy enough to see it burning both liberals and conservatives: liberals will be blamed since they signed the nuclear deal and yet brought no rapid prosperity while conservatives will earn some scorn for having earned the sanctions to begin with. A rickety Iranian state looks likely; it seems probably they will take fewer risks abroad with their internal divisions so stark.

Saudi Arabia is hardly in great shape: its social bill is hefty and Saudis are not used to being told no, least of all by their coddling government. Having started a war in Yemen and decided to try to break fracking oil, the costs are adding up: Riyadh could run out of cash in just four years. There are many fancy financial tricks Saudi Arabia can play: it can run up debt, cut subsidies, cancel projects and just plain fiddle the numbers, but none of these actions will increase their stability. They’ve even floated the idea of selling stakes in Saudi’s sacred cow, AARMCO, the state-owned oil company, though how that would likely work in practice is merely allowing already-rich Saudi sheikhs buy stocks rather than bringing in new foreign investors.

At least Saudi Arabia has some control of its destiny; should it cut production, it could spike prices again. But King Salman and his regime seem determined to drive the nail in the coffin of fracking before they do so. This also allows the monarchy to embark upon much-needed social reform, firing useless government workers, expelling foreign laborers and trying to modern its human capital. But that process will not win it many friends.

So it is the end of the oil despot’s meglomania: that is, overall, for the best

Oil prices are unlikely to spike back to their 2008 levels again. Fracking technology may become expensive, but oil companies can always shelve it and wait for better days. This is key to why oil regimes will never again gain the leverage they had. A permanent alternative exists and will only get better.

It has the potential to moderate regimes by restraining what power they have. But greater chaos may also be in store as leaders lash out to distract from lackluster economies or failed social reform. Putin’s Russia has shown such tendency; among the petro-states, Moscow will remain the one to watch for further violence.

But it is truly a new era. Oil will be important, but no longer as decisive as it once was. Riyadh and others can grow nostalgic for better days, and hope they can weather the change.

*This article originally appeared at Geopolitics Made Super, January 13, 2016.