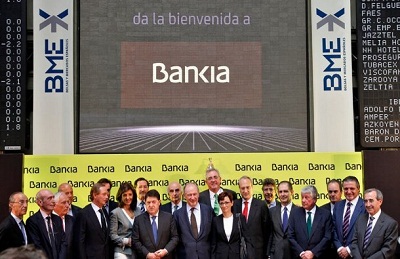 By Tania Suárez, in Madrid | In a context of economic crisis, where everybody feels on the verge, people are demanding justice. And justice, for a change, is doing its homework. Mirroring the process affecting Barclays, now is the turn of Bankia.

The political party led by Rosa Díez, Unión Progreso y Democracia (UPyD), took legal action against the Spanish bank and filed a complaint with the Audiencia Nacional, the national High Court of Spain. Late on Wednesday, it accepted the lawsuit. This action was taken against Bankia, its parent company Banco Financiero y de Ahorros (BFA), and also against 33 of its former directors. Even Rodrigo Rato, former vice president of the government and, until recently, president of the bank, has been sued.

The action initiated by UPyD has been promptly followed by other discontented voices. Thus, the Manos Libres union, the group formed following the 15M protest movement, and the Association of Savers ADICAE have filed their own complaints.

The accusations in the lawsuit accuses refers to different four crimes:

Alleged falsification of annual accounts. Apparently, Bankia changed the numbers of its accounts, and presented in 2011 a profit of €304 million that later turned into losses.

Misdemeanour of false administration. According to the report of the Audiencia Nacional, there would have been an “unlawful misuse of company assets” and the political power would have “prevailed over the economic performance.”

Alleged misappropriation. This alleged crime would also include a generous pension plan for directors.

Manipulation of prices. According to this Spanish court, the ruling elite of Bankia tried to “maintain the quoted price by all means” by a “manipulation of the existing information.”

The Audiencia Nacional has decided to call other important figures of the Spanish political and economic scenario as witnesses. Among them are the former governor of the Bank of Spain, Miguel Ángel Fernández Ordóñez; the president of the Comisión Nacional del Mercado de Valores (CNMV), Julio Segura; and the legal representative of the Committee of the Fund for Orderly Bank Restructuring (FROB).

The court has also required extensive documentation from the bank, including copies of the board minutes from January 2010, and the ones used as justification of the aid package requested to the FROB.  The Audiencia Nacional has required records of the flotation of Bankia, and has asked the Bank of Spain for other documents about the capitalisation plan and the inspection of Bankia from January 2011.

Rosa Diez has defended the lawsuit:

“We will see 33 people that are responsible for what has happened with Bankia facing the justice. And that is positive news for the 100% of Spanish citizens.”

Shortly after the Audiencia Nacional accepted the lawsuit, Francisco Verdú, Chief Executive Officer (CEO) of Bankia, has resigned.  So we can see that this disciplinary action is just the first step in the investigation of the Bankia case. We will see how it ends.