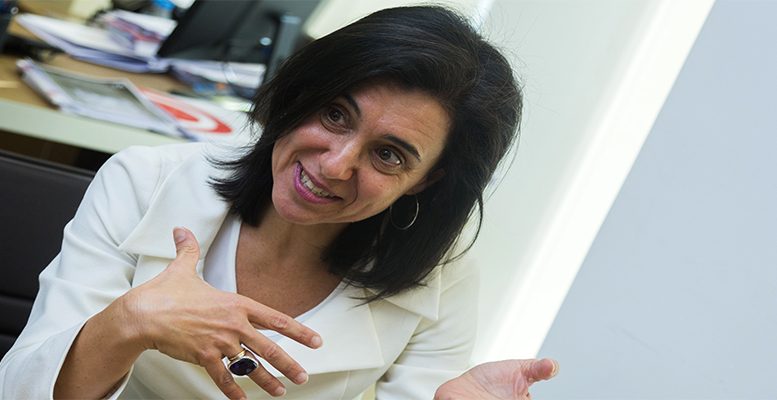 “We are still generating 20% of our electricity with coal and this increased in 2016 compared with the previous year. Because it was cheaper than gas. Coal prices have not stopped falling, basically because the US has been exporting the coal it doesn’t use at home at very competitive prices,” says Carmen Gómez de Barreda, board member at Red Eléctrica  and managing director of the Corporation for Strategic Reserves of Oil-Bearing Products.

Question: What’s happening with the oil price? Why is it still cheap?

Answer: There are a lot of factors involved. There has been an oversupply situation in the market. With the price of a barrel of oil at between 80 and 100 dollars, there is a lot of production infrastructure with the capacity to supply the market. On the one hand, there is increased supply because of US production but, on the other, the main oil producing countries, led by Saudi Arabia, have not cut their production in order to maintain their market share. It was the producers with high costs who were obliged not to produce. Iran’s return to the market has also contributed to this situation, as well as Irak’s need to maintain production to deal with the challenge from ISIS. This excess has caused a clear drop in the price oil, which reached 30 dollars in 2014. But it recovered the 40 dollars level in 2015 and it looks now as if it is closer to around 50 dollars,

Q: What’s the future of gas going to be in ‘decarbonisation’?

A: It will play a key role in meeting environmental commitments. An increase in renewables requires the support of natural gas. The security of supply makes natural gas the ideal support technology because of its flexibility and capacity for supplying energy very quickly. In other words, providing a response when we don’t have water, wind or sun.

Q: Why not nuclear energy?

A: Nuclear is a basic energy, not a ‘back up’. It will be difficult for it to grow and what will happen is that it will maintain its current levels, contributing around 20% of electricity generation.

Q: But the electricity companies complain they have made huge investments in combined cycle plants which are now underused. Only 11% of their capacity is used.

A: The problem is that these investments were planned before the crisis, with forecasts for double digit consumption growth. Furthermore, that was before renewables were rolled out in a significant way. But the main issue is that the thermal energy gap which these plants should be covering is being covered by coal. Coal is still contributing about 20% to our electricity generation process, and this increased in 2016 compared to the previous year. If that wasn’t the case, gas would contribute more.

Q: The interesting thing is that most of the coal used is imported. Why is coal being used when it contaminates more than gas?

A: Because it’s cheaper than gas. And that’s the point: no matter how much we try to establish targets, companies operate on a day-to-day basis, look for economic efficiency and use the cheapest form of energy available. For that reason, if we want to reduce the use of coal, a price has to be put on its emissions. If that doesn’t happen, we find ourselves with a situation like that in Germany, a complete contradiction. After the nuclear plants were closed in the wake of Fukushima and pressure from the greens, what was the substitute for that energy? Coal played an important part.

Q: What’s Spain strategy going to be in this energy transition?

A: We have very clear challenges, making the transition by placing value on our strengths. And what are they? The first is our position in renewables. We have one of the best infrastructures in Europe. We have been able not only to produce a lot of electricity based on renewable energy, but also to integrate it to the maximum in our generation system. This is something which many have not been able to do. Red Eléctrica, and the way it operates, has been a pioneer, positioning itself as a global reference in renewables integration. If we add our priviliged position as an energy corridor to our renewables strength, we have unbeatable possibilities of advancing.

P: Talking about this position as a corridor, what’s the situation regarding the project to transport gas to Europe?

A: All the conditions are in place to do this. We not only have the pipes which connect us by sea with Algeria and Morroco, but we also have regasification plants for liquified gas, which brings a lot of flexibility. Northern Europe gets most of its gas from Russia via pipeline and Spain gets it from 11 different suppliers. Diversification allows for flexibility and capacity for reaction in the face of supply risks. If we used those plants and gas pipelines to bring gas and then take it to Europe, the dependency on one supply source would clearly improve.

Q: It would be very significant for everyone. But we have been talking about this for years and nothing has been done that we are aware of.

A: Some things have been done. For example, interconnections are being built through the Pyrenees, which is important. Last year, an interconnection for 2,5 bcm of gas was inaugurated, so we now have a capacity of 7,2 bcm. And there is a third one in the works, which would double the interconnection capacity. In any event, what there is at the moment is clearly insufficient.

Q: Why has this not happened more quickly?

A: Well, Europe is betting increasingly on the creation of an internal energy market. This means not only boosting Spain’s interconnecion with France, but also the interconnection between that country’s markets which are isolated.

Q: The single market is obviously important for us?

R: Yes and, furthermore, it is the only way to advance when the investments needed are costly and involve long construction periods. They are reasonable if we look at them within the common framework and in terms of their contribution to improving European energy policy. In Spain’s case, the flows of gas allow for improved supply. And they also allow for greater penetration of renewables production in electricity, using the energy when it is produced and avoiding dumping, as sometimes happens, because there is not enough demand. The interconnections will allow for the evacuation of that electricity. And this means greater use of renewables and less emissions. But we are not just talking about Europe: we are interconnected with Morroco. We supply around 14% of consumption in that country. The reasonable thing would be to progress in the same way in our connection with north Africa. The viability of a second interconnection project with this country is going to be looked at.

Q: So in the end, from what we can see, we have to conclude that progress in creating a single energy market is slow?

A: It’s true that it’s advancing, but slowly. The Iberian Peninsula is still below the target of a minimum 10% of interconnection, but in Europe this is changing completely. There is a lot of talk about the MIE – The Internal Energy Market – with a more in-depth focus. For Europe to grow, it’s fundamental to have adequate energy prices and boost competition amongst the different companies and forms of energy. The more open a market is, its prices will reflect efficiency gains.