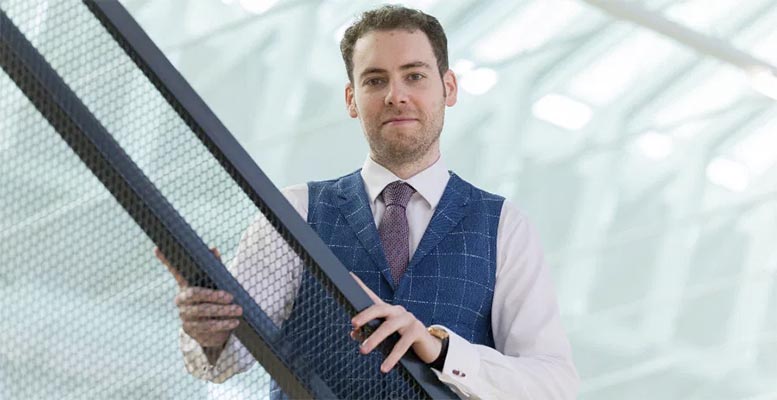 María Fernanda Martínez Sierra | “Investment portfolios usually contain positions of different risks, and today covering that part of high risk assets not correlated with the rest is a problem. There is a shortage of assets with the market depth and the high volatility that crypto currencies have. That is why many investors access this market… many savers only contract bank deposits, because of their low risk, and then buy lottery tickets. The strategies in investment portfolios are not so far removed from that analogy.”

Alberto Toribio’s company was the first Spanish company to be set up with its share capital in crypto-currencies. Since then, it has been studying how to fit blockchain technology and intelligent contracts into financial markets and products. In March, Toribio was appointed ambassador of Crypto Plaza, the main DeFi (decentralized finance) hub in Spain, where the cryptocommunity meets to exchange knowledge.

Q: Fintech today represents 5% of the banking business. Isn’t it paradoxical that, in a technology such as crypto-currency created to avoid banking, it is precisely the banks that invest?

A: In most countries there are regulated businesses in which there is no free competition: pharmacies, tobacconists, cabs… since the State only grants the privilege of such activities to a few. A bank is another of these businesses. And, amongst other things, it enjoys the privilege of buying money from the central bank at an interest rate, then sell it to citizens at a different rate. Today, however, this is not the only way a bank makes money, nor is it the one that has the most impact on its bottom line. Fintech companies do not have a banking license, yet they do business by providing many of the services a bank does. Loans to individuals and businesses, revolving cards, or currency exchange are a few examples. Crypto-currencies were designed to replace central banks. But not to eliminate the intermediaries in the provision of those financial services I have described and which are the most profitable today. Whatsmore, the intermediaries have not been eliminated, but replaced. The trust placed in central banks has been replaced by trust in the Blockchain miners, who perform some of the functions analogous to those of central banks, at a fraction of the cost.

Q: Today there are 5,000 crypto-currencies… How many do you think will fail and how many will survive? Which one should they start to invest in?

A: In no respect can my preference be taken as an investment recommendation, since we are talking about high risk products which are very complex. After issuing this warning, I think Bitcoin will continue to be an interesting bet in the future due to its different integrations with Ethereum. This allows Bitcoin to be part of the DeFi ecosystem through synthetic products. These mechanisms allow Bitcoin coins to be blocked in the Bitcoin network and to start existing in the Ethereum network as tokens. There they can participate in investment strategies, loans, liquidity pools and robo advisors like robosets. I also think that the Ether is going to be an interesting bet after the change of currency creation from “work test” to “participation test,” expected to happen in the next 12 months. When this happens, the Ether will become an investment that generates “dividends”, and this will be attractive to many investors. Finally, I believe the most important investment opportunity at this time is not in cryptomonies, but in DeFi protocols and startups in which one can invest by acquiring tokens. Many of these projects have an impressive growth trend, which I believe will continue in the next two years.

Q: Cryptocurrencies are presented as a safe haven in the face of so much uncertainty. How can a market with so much volatility be a refuge compared with gold?

A: Bitcoin and crypto-currencies are considered as refuge investments because their performance is not linked to that of the traditional market. However, it’s worth noting that Bitcoin didn’t behave as a safe haven during the COVID-19 crisis. Neither have traditional safe havens, such as gold. I believe the main reason why investors consider crypto currencies an attractive investment is not because they consider it a safe haven stock, but because it doesn’t correlate with the rest of their investment portfolio. It is also influenced by the fact that in the last few years there has been a shortage of assets with the market depth and the high volatility that crypto currencies have. Although it may not seem so, highly volatile assets are necessary in many investment strategies. Investment portfolios typically contain positions of different risk. Depending on the risk aversion of the investor, the portfolio will have more positions of one type and less of another. Many savers would never contract a product other than a bank deposit – with low risk – but nevertheless play the lottery. The strategies in investment portfolios are not so far removed from this analogy.

Q: How do you think the crypto-currency market will evolve? Do you think any of them will be able to obtain a higher value than the big technological companies?

A: Bitcoin is the most capitalised crypto currency valued at $172 billion, which puts it behind the 20 most capitalised companies in the Dow Jones. However, no other company with similar market capitalisation has the same growth trend. That is why I think it is very likely that, even if the comparison is very forced, some of the existing crypto-currencies will at some point exceed a valuation of $200 billion, competing in size with the companies in the Dow Jones top 20 ranking.