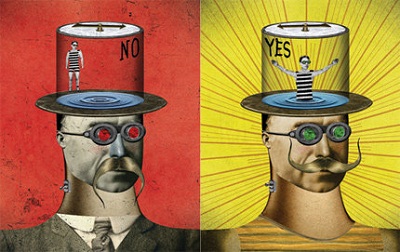 WASHINGTON | Our brains do not seem to have been made for a modern-day economy. They are much better suited for deciding among a limited —a very limited— set of options. This could make sense when we were living in caves —for several tens of thousands years, let’s not forget—, and the main selection we had to make was to pick a partner to mate with or a mammoth to take down. In today’s world, however, our brain has become antiquated. Just picking a car in the U.S. means making a selection between almost 300 different possibilities, if we take into account just brand, model, and color.

Our brain becomes even more puzzled when the selection must be done among highly symbolic elements —for instance, when we pick a stock or another asset to invest. That means the more chances we are offered, the less creative we can be. Ask the E.U. leaders about their reaction to Greece, and more than a social-democratic or moral hazard problem, it seems to be linked to the lack of experience in dealing with this situation and the seemingly endless ways of getting out of it (admittedly, these options are becoming narrower and narrower).

Those are some of the findings made by NYU’s Professor Paul Glimcher in his book ‘Foundations of Neuroeconomic Analysis‘ (Oxford University Press, 2011). The Neuroeconomy is a new discipline that tries to trace in our brain concepts such as ‘value’, ‘chose’ and, ultimately, ‘money’. It is an ambitious task —it means merging medicine, bio-chemistry, biology, psychology, and medicine. But it is the logical development of behavioral economics.

Neuroeconomics has been lambasted by neoclassical economists. “Why Neuroeconomics?” was an article published in 2008 by no other than Nobel Prize winner Robert Lucas. Rejections are understandable. A big chunk of the economics edifice will be torn to pieces if Neuroeconomics develop in full and confirm its hypothesis. Rational expectations do not fit into psychology. And, if we follow experience, then bubbles can be explained —or the belief that European, rich countries do not fall into crisis because, well, they haven’t in the last few decades.

Be the first to comment on "Bankers, ministers, economists: you’d have to be out of your mind to fix the crisis"