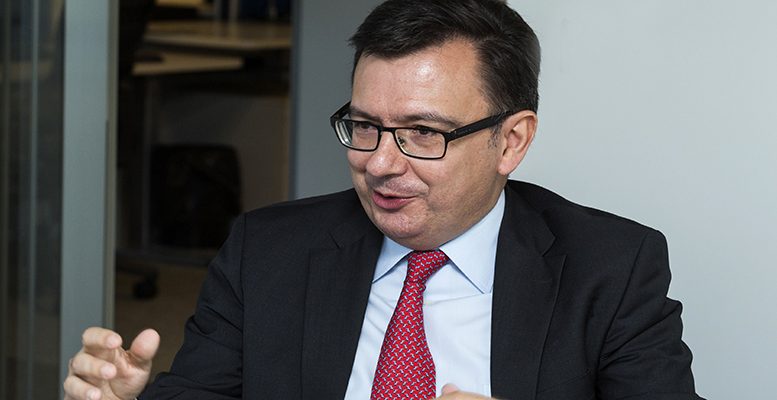 Luis Alcaide | The Juncker Plan, which ends in 2018, has already passed its mid-point. Román Escolano, deputy chairman of the European Investment Bank (EIB) explains that “After Italy, Spain is the second country to benefit the most (from the plan). There are already 53 operations ongoing, with 4.5 billion euros financing from the EIB, which will facilitate the mobilisation of over 28 billion euros of  total investment.”

Q: Is Spain an active participant in terms of EIB financing and the Juncker Plan?

A: Spain is playing a very active role in terms of how the Plan is developing. The operations in Spain have traditionally been innovative for the EIB. Here ideas and products have been introduced which have later been generalised across the EU. For example, with BBVA we have recently set up a securitisation structure where the bank takes on an intermediate part of the risk (mezzanine funding) which would have been difficult to imagine without having the guarantee of the Juncker Plan. This has been a pioneer securitisation structure and has given an interesting indication to the market. In this sense, the EIB is fuelling innovation in Spain and contributing new value to the market.

A: As a result of the Juncker Plan, new clients are involved who perhaps would not have been on the EIB’s funding radar a few years ago. That allows us to go much further than just classic infrastructure projects and operations with the banks. In those cases, it’s not about corporate financing alone, but about financing projects which, in any case, have a public policy component and fit in with our eligibility criteria. The aim of these cases is to finance very important innovation projects. In this sense, the EFSI is a very powerful mechanism to facilitate financing for innovation. A project of this kind is always uncertain and financing on a seven, eight or 10 years horizon goes beyond the comnercial banks’ appetite. So we create value, both for the client who receives the funding as well as for the rest of the banking pool, which places the rest of the financing at shorter maturities. It seems to us that in Spain this financing for innovation helps an intermediate group of Spanish firms which are starting to have a very global reach, but need a push to become real leaders. I believe we are creating a lot of value in this intermediate segment.

Q: And apart from Spain, how is the European Fund, namely the Juncker Plan, developing?

A: It’s still too soon to give a definitive opinion. The macroeconomic evaluation will be able to be made as the Plan comes to its end. But with the figures available, we believe the development is satisfactory. We are passing the mid-point – 58% – of total expected investment. In Spain there are 53 operations, 4.5 billion euros of financing from the EIB in EFSI projects, in higher risk projects, and this will allow 28 billion euros of total investment to be mobilised. The impression is that it’s working as was predicted. The IMF has just published its estimates on how the eurozone is doing and there is an interesting sidebar showing how the EFSI plan is beginning to effect total investment in Europe. The country which has benefitted the most from a macroeconomic point of view from the Investment Plan for Europe is Italy, in terms of the total of investment mobilised. And Spain is in second place, with 14%. In other words, the IMF estimates that 14% of the investment financed in Spain is somehow linked to the Juncker Plan. So we are talking about a significant impact.

Q: Is Germany one of the EFSI’s targets or not? Because in some way or another it should be the big driver thanks to its abundant financial resources and its deficient infrastructures.

A: Germany is a country which is always absolutely key for any European initiative. The Eurozone is recovering, with growth close to 2%, thanks to Germany and Spain. They are the ones pulling on this cylical recovery. Germany has a clear margin for improving its infrastructures and making an important investment effort. The reality is that it’s an important beneficiary of the Invesment Plan for Europe, as well as funding for new infrastructures, which in many cases are essential. It’s obvious, but from a geographical point of view, Germany is in the centre of the EU. So an integrated Europe needs infrastructure, particuarly across the trans-European corridors, which has a lot of capacity and is top quality. But I must insist that this Plan should not be seen as contradictory to the fiscal policies for stability. A fiscal policy focused on stability with support for private investment, via financial instruments and the EIB, is compatible with the Juncker Plan.

Q: Could Brexit and the non-participation of the UK have any kind of restrictive repercussion on the community budget?

A: The EIB’s statutes are clear and the EU’s negotiating position, made public by Michel Barnier, is as well. Only an EU member state can be a shareholder in the EIB. For a long time, the UK has been the fourth country in terms of receiving financing from the EIB, with very important projects and a lot of visibility. The improvement in its infrastructures has been, in many cases, financed by the EIB. At the moment, the UK does not have a similar financing mechanism and, although the public doesn’t know much about this, it will be an important Brexit effect. But the 27 members have made it crystal clear, since their meeting in Bratislava, that the EU is not going to curtail its ambitions. And the EIB is undoubtedly one of the big successes of the European integration process.