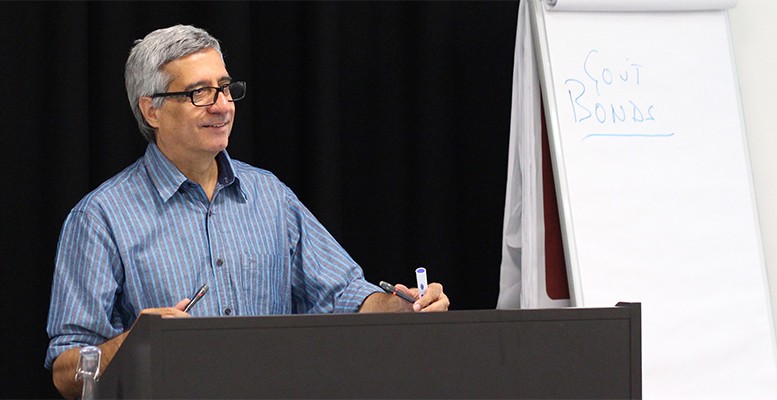 Julius Sen, Academic Director at the London School of Economics thinks that “we have a flexible model. The market knows it and plays with it, forcing looser monetary policies and tighter fiscal policies with the stability pact in Europe and the ‘sequester’ in the US.  Sen claims that “there will be debt reliefs in some eurozone countries.”

Q: Last summer marked the tenth anniversary of the G8’s massive debt relief and no one noticed. Amongst other reasons because, with the tightening of monetary policy in the US and the collapse of the price of raw materials, the relieved countries owe as much debt as they did then. Will this situation continue?

A: Small countries and those dependent on exports of raw materials are the most vulnerable to the changing global macroeconomic situation. Also because these countries have little foreign exchange reserves and few monetary policy tools… The beginning of the normalization of monetary policy in the United States has been carried out after a tremendous process of consultation between the Federal Reserve, the central banks of the G20, the Financial Stability Board and the Bank for International Settlements. But I don’t know to what extent these consultations have also been conducted with small developing countries. The only advantage that these economies have is precisely the fact they are quite isolated from the rest of the world.

A: The Fed has ceased to consider only internal factors, although it tries not to say that because the US Congress would get furious. That has allowed room for a new model which is much more sensitive to the global effects of monetary policy in each country. But to say that the ‘benign neglect’ is over is different. I don’t think it’s over because fiscal policy is not moving and, although the US is more integrated into the world economy, the Federal Reserve is taking the domestic situation into consideration.

A: It is to the extent that we are willing to accept a poor, unstable recovery which is full of ups and downs. The problem is not that central banks are in charge of the recovery. The problem is that they are because those who are responsible for other economic policy tools don’t know, can’t or don’t want to do their work. Without any doubt, the central bankers will do whatever it takes to ensure the recovery. That’s their job. And they will do whatever it takes, even if it means being on the edge of legality. Just like the Federal Reserve in the worst moments of the 2008 crisis, or like the ECB has done later. The IMF has admitted that capital controls are acceptable in the event of a crisis. And it would not surprise me if some large countries were to impose them if the instability in emerging countries worsens.

Q: So could we see more central banks’ ‘activism’ even if the recovery consolidates.

A: Yes, without a doubt. They are the only ones who can be activists, or who dare to be. Democratic governments are not fulfilling their duties.

Q:Isn’t it a tremendous paradox of democracy that some organizations, run by technocrats, are those who lead the economy because governments are not able.

A: Yes. And it’s a problem that will get bigger because as central banks take more and more action, governments are more inhibited. No elected official will make decisions if a technocrat can do it instead. That’s why there is some logic in the argument about whether the role of central banks is too big. The truth is that we need technocratic institutions. But where is the balance? In Spain, the US or UK the governments are inhibited. It is more convenient to blame the ECB, which is in Frankfurt, than assuming responsibilities. It is logical and legal. But it is also something that generates dissatisfaction in public opinion, which does not feel represented. Furthermore, a recovery based on monetary policy generates inequality, which tends to produce more dissatisfaction in public opinion and more rejection of the political ‘establishment’.

Q: It is a vicious cycle.

A: Exactly. We are in a catch-22 situation. On the one hand there is fiscal austerity with the Stability Pact in Europe and the ‘sequester’ (automatic spending cuts) in the US. We have a flexible model. The market knows it and plays with it, forcing looser monetary policies and tighter fiscal policies. Because the market is more pragmatic than it says.

Q: What do you mean?

A: In a situation like the current one, with the ECB being so, let’s say, ‘activist’, financial operators are not going to do anything else but carry out more lax fiscal policies. They know that there will eventually be more debt reliefs in some eurozone countries such as Greece. They will not be explicit debt reliefs, but other methods will be implemented: refinancing, debt maturity extension, etc… It has already happened. And most investors know that it will happen again. But suggesting that is anathema to governments.

A: On the one hand because the media tends to exaggerate when volatility occurs, meaning that speculators have more incentive to tighten the market. In turn, if that were suggested, there would immediately be a political storm. But investors end up returning to the countries that have defaulted, if and when there is liquidity, and they earn a risk premium. Whenever there is a default, they say that country will be out of the financial circuit. They said it when the USSR voided the Czar debts. They said it again recently when Ecuador suspended payments. And it has never happened. Now, for example, investors are eager to return to Argentina. Capital always returns.