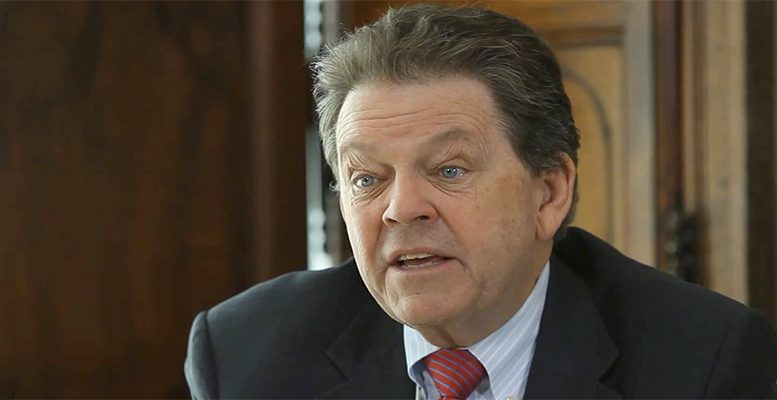 Arthur Laffer, economist and author of the Laffer Curve

Pablo Pardo (Washington) | Arthur Laffer hasn’t lost his enthusiasm for an argument. He wears his 76 years obscenely well (“I’ve got good genes and I love life”) and continues to defend the supply-side economy and its curve. The curve, named after him, demonstrates, in a conceptual and educational way, that from a certain level of tax onwards, revenues fall because people don’t have any incentive to work. And the Supply Economy originated from this. And Laffer, who lived in the glory days of the 1980s when he advised Ronald Reagan and Margaret Thatcher, had just invented an economic concept which is still the subject of debat today.

Q: Is it true that you support Trump?

A: Obviously I agree with his fiscal policy. I believe that his plan to cut taxes is a good one. But I have my doubts about this trade policy. I don’t like his protectionism and hope he doesn’t carry out his threats, that these are no more than a negotiating tactic.

Q: Before the crisis you also said the crisis wouldn’t happen. You had a memorable televised argument with the manager of the brokerage firm Euro Pacific, Peter Schiff, in August 2006 on CNBC. Schiff said the US was on the way to a serious recession due to an excess in consumption and the lack of savings. You replied that the economy “has never been better.”

A: Do you want me to tell you honestly what happened?

A: Well Schiff had been making this prediction for years. Time after time. And, if you always say the same thing, one of these days you’ll be right. And, later, I wrote a book entitled “The End of Prosperity”. Now, did Schiff read that? No, of course not. But that doesn’t matter. He was already angry with me.

Q : And so, ten and a half years after that argument, tell us: What caused the crisis?

A: The reason for the crisis was excessive public spending, which at the same time fuelled the property bubble. When this burst, George W. Bush panicked, and as Obama’s election possibilities started to increase, the market crashed.

Q: How many boards have you served on in your lifetime?

Q: What has your experience been like? In the US, a lot of people say that independent board members simply exist to endorse the management team’s decisions.

A: That is the reality. But this doesn’t lessen the value of independent board members. Because they have to decide when to “endorse” and when not to. And that’s where they can play a key role. I have resigned from three or four boards for this reason. On one occasion, I even reported the company to the SEC. My lawyer told me not to do it, but I didn’t listen to him. This company does not exist today and the SEC fined all the board members expect me. Going to the SEC to the SEC is very unpleasant because, although you are going to tell them about some irregularity, they don’t exactly consider you a hero.

A: Because I believe trust is very important. If you are on the board, you represent the shareholders. And when I went to the SEC, it was because I sincerely believed the companies were breaking regulations.

Q: But apart from ethical considerations, you had no, let’s say, economic incentives

A: Exactly. That’s the problem. A board member in the US receives share options. So you only earn money when the share price rises. If you go to the SEC, you are doing the right thing, but it costs you money. There is no adequate compensation system in place for board members. Look at the case of Martha Stewart – a television star who went to jail for trading in shares of her own company Martha Stewart Omnimedia. She bought and sold shares based on information which was in the public domain, but thought that what she was doing was illegal, so she lied to investigators. And that’s what sent her to prison. That’s an example of the risks people can take when they have incorrect incentives.

Q: But how can you tell when a company has good corporate governance?

A: You only get to know this when you are inside the company. If you’re on the outside, it’s impossible. Until the company begins to have problems of course. But then it can be too late. I’ll give you an example: in one company where I was president of the auditing committee, the CEO managed 123 acquisitions in just a few years in an almost personal way. He did everything with so much transparency that I never felt at all worried. And if you are a board member, you don’t always get all the information. You need to make an effort to find out more about what’s happening in the company. You can have as many institutional and organisational counterbalances as you like, but those who run the company are always going to be perfectly capable of hiding anything they want.