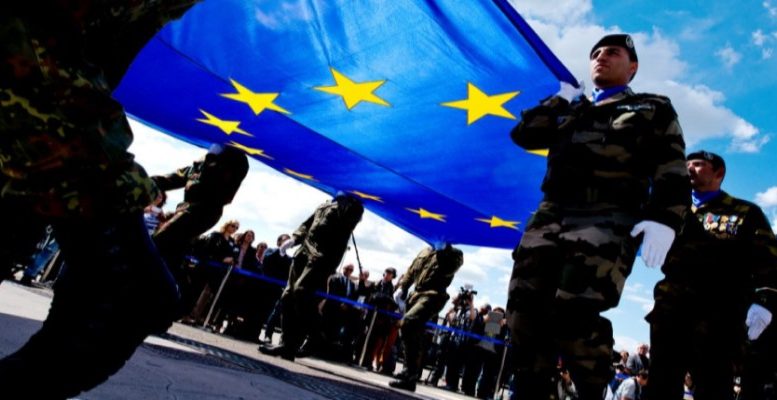 Lélia Rousselet via Macropolis | On November 19, the EU’s foreign and defense ministers approved the project of a joint intelligence training school (Joint EU Intelligence School – JEIS), led by Greece with the participation of Cyprus.

This project is part of a list of 17 joint projects signed within the PESCO framework[1]. PESCO (permanent structured cooperation) was launched in December 2017 by the EU Global Strategy for Foreign and Security Policy (EUGS), whose purpose is to broaden and deepen defence cooperation between EU countries, on air, land and sea. It has been signed by all EU states except Denmark, Malta and the United Kingdom.

These projects, in addition to the 17 others already announced in December 2017 and March 2018, arrive a few days after a push from France and Germany for more means and increased investments for Europe’s defense policy. In a radio interview on November 6, 2018, French President Emmanuel Macron mentioned the idea of a “European army” – triggering a strong twitter reaction from President Trump. Also, the German Defence Minister Ursula von der Leyen talked about an “army of Europeans” in a recent op-ed for the Frankfurter Allgemeine Zeitung. Even though nuance has been added to these statements since then, the fundamental idea is that of a more coordinated and efficient defence policy between European countries.

The purpose of the Joint EU Intelligence School – which would be based in Cyprus – is to “provide education and training in intelligence disciplines and other specific fields to EU member states intelligence personnel”[2] in cooperation with national agencies and NATO.

Historically, the idea of common intelligence at a European level is not new, and the EU already created a European Union Intelligence and Situation Centre (EU IntCen), not to mention all existing bilateral agreements between European countries to share intelligence analysis. However, not all 28 EU countries take part in the IntCen, and the purpose of this institution is limited to provide strategic analysis of crises in the EU neighborhood and counter-terrorism rather than “sharing of “operational” information – intelligence on specific threats by specific actors on the basis of which EU member states could take action”[3].

Intelligence is a national prerogative above all, and the sharing of information (especially raw information) is not always the most effective way to counter threats. On the other hand, a common intelligence culture would certainly be beneficial for European security.

In this context, a joint intelligence school to share best training practices will definitely help to create a more inclusive intelligence community at the European level and could be seen as a first step towards a more operational intelligence cooperation.

The fact that this “007 training center” will be overseen by Greece and Cyprus has led to sceptical, if not amused, reactions among policy-makers and experts, as these countries are considered the two most Russia-friendly states in the EU. Economic, trade and military cooperation with Russia has often been a priority for Greek foreign policy, as is the case for other countries in the Balkans. The risk of disclosure of classified information to the Kremlin is one of the biggest concerns. And, as Dr Ioannis Nomikos, Director of the Research Institute for European and American Studies (RIEAS), points out, “trust is far more important than institutions for intelligence sharing.”

Beyond these doubts about the project leaders’ ties with Russia, many questions remain about the implementation. What will be the schedule? How and by whom will the contents of the teachings be supervised? Will the lucky students be selected by their national intelligence service or by the school, and under which requirements? Most of the PESCO projects previously announced (last December) have not been implemented yet, and we can wonder if this new initiative will also remain merely on paper.

Moreover, the fact that no other PESCO members have joined Greece and Cyprus – two countries was the minimum required to submit a project to the vote – may reveal the limited scope of the project. Belgium, the Netherlands and the Czech Republic have expressed their interest but have made no decision so far.

Notably, France did not step up to cooperate with Greece and Cyprus as the idea of a “European Intelligence Academy” (EIA) was one of the key policy initiatives announced by President Macron in his speech for Europe at La Sorbonne University on September 26, 2017. The French Presidency and the French Ministry of Foreign Affairs released a communiqué last September – way before the vote of the JEIS project – announcing that the first training session of this EIA will be in spring 2019, suggesting that this academy exists.

According to Dr. Nomikos, any project involving an intelligence school at the European level should follow the French model – based on a collaboration between the civilian and the military – which is the most successful and efficient in Europe. Therefore, France seems in the best position to promote a common intelligence culture in Europe, and we can wonder if the JEIS and the EIA are similar (and redundant) or related projects.

All these elements lead to doubts as to the relevance of this initiative, its articulation with the projects already initiated, and its actual implementation.