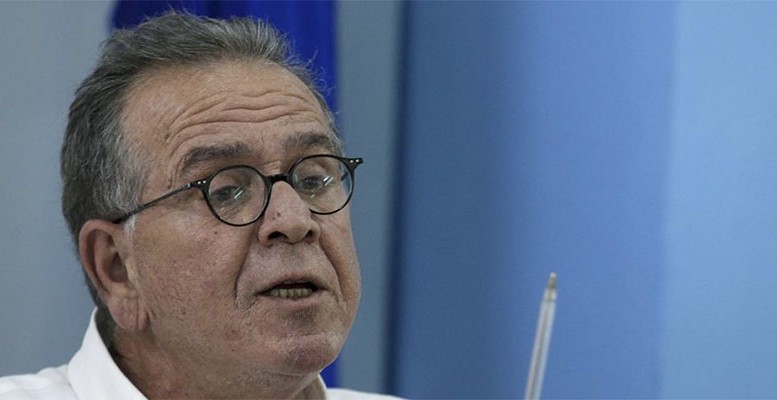 Nick Malkoutzis via Macropolis | Greece’s Migration Policy Minister Yiannis Mouzalas could find himself out of a job or demoted soon because he slipped up in an interview. That his position is in peril for a verbal faux pas when others are going about their jobs unperturbed despite helping running the country into the ground is a pretty succinct statement on the interminable absurdity of Greek politics.

Mouzalas made the mistake of referring to one of Greece’s neighbours, the Former Yugoslav Republic of Macedonia (FYROM), simply as “Macedonia” during an interview about the refugee crisis. This awakened the spirits of the past, which have often dozed off but never disappeared since Greece’s name dispute with its northern neighbour broke out in the early 1990s.

The first of the chest thumpers to emerge from the blocks was New Democracy, which suggested Mouzalas should resign. Not wanting to be outdone in the patriotism stakes, Independent Greeks leader and Defence Minister Panos Kammenos demanded that the former Doctors of the World founding member quit his post. PASOK and To Potami looked on, mostly in bemusement.

This was the prelude to a day or so of political grandstanding by Kammenos, who met with Tsipras and his right-hand man, State Minister Nikos Pappas, to air his grievances. The SYRIZA officials seemingly found a way to appease their coalition partner so that at least Mouzalas would not be forced out in the build up to the crucial EU–Turkey summit at the end of the week.

It’s not clear exactly how Tsipras bought himself some time and perhaps a little more acquiescence from Kammenos than seemed possible in the wake of Mouzalas’s slip. This will perhaps become evident in the next few days. But what this brief episode did reveal is the shallowness of Greece’s political elite.

New Democracy, which under the new leadership of Kyriakos Mitsotakis was meant to show a more progressive side, laid bare its still-prominent nationalist-populist tendencies by immediately calling for Mouzalas to quit. Its decision was made even worse by the fact that the Macedonia issue is what ultimately brought down the government led by Konstantinos Mitsotakis, Kyriakos’s father, who fired Antonis Samaras as foreign minister in April 1992 due to his independent and hardline approach over the dispute with FYROM. Samaras then led the defections that caused the New Democracy administration to collapse in September of the following year.

Kammenos was embarrassed within hours of his furious demands for Mouzalas to walk away when it emerged that in a TV interview in January he had referred to Greece’s neighbouring country as “Macedonia” four times. For his sins, Mouzalas only slipped up once at the start of his interview and then went on to make reference to “FYROM” or “Skopje” in the remainder of the show.

Tsipras, though, was also left exposed as he did not show any backbone and rise to the defence of one of the few ministers in his government that has tried to fulfil his role with any professionalism. Also, SYRIZA has maintained a much more conciliatory position on the name issue than other Greek parties and Tsipras’s government has made efforts since last year to strengthen ties with Skopje, including through confidence-building measures. One of his ministers letting slip the word “Macedonia” in an interview should never be a sackable offence in a Tsipras government if the prime minister has any regard for his beliefs.

Perhaps realising that they had overreacted to a relatively innocuous infringement by Mouzalas, who after all is not a politician, Mitsotakis and Kammenos attempted to bolster their cases by accusing the migration policy minister of having made other gaffes and failing to tackle the refugee crisis effectively.

Kammenos’s criticism, though, may have been motivated by his personal dispute with Mouzalas, who had in the past blamed the defence minister for failing to cooperate in the preparation of reception centres for arriving refugees and migrants.

Mitsotakis focussed his criticism on the dire conditions at the Idomeni camp on Greece’s border with FYROM, which he visited briefly this week, and the apparent absence of the state from such facilities.

However, this issue was addressed by Mouzalas in the Skai TV interview that prompted all of this week’s kerfuffle. It is doubtful, though, that any of his critics watched beyond the first few minutes, when the M-word was uttered. He explained that the government did not create a proper camp at Idomeni because of legal complications linked to its status as a border area and informal crossing into FYROM and because authorities were concerned that a full-blown facility would create a pull-factor for refugees.

This led to Greek authorities asking the UNHCR and other NGOs to provide basic amenities for the refugees who gather there and for the state to remain on the sidelines as much as possible.

The minister also explained that the authorities are trying to complete other facilities to which the refugees at Idomeni can move, but that many of them are refusing to do so because they fear they will miss their chance to cross the border when (according to their hopes) it will reopen. This is something that is backed up by the numerous reports from journalists who have visited the camp.

Mouzalas and his actions have been far from faultless since he took the job last August. To his credit, he openly acknowledges the errors that have been made. Also, there must be questions about whether the government has failed to maintain the appropriate balance in terms of the state’s presence in Idomeni and at other camps. The absence of police officers, soldiers and other state officials may help in the sense that professionals with experience of managing humanitarian crises (unlike Greek authorities) are given the space to do their job. However, a complete retreat also allows things to get out of control, as was the case on Monday when hundreds of refugees hauled themselves over the FYROM border after being roused by – as yet – unknown people promising them they could reach Germany on their own.

In his interview, though, the migration policy minister was honest enough to accept that the constantly shifting reality of the refugee crisis, coupled with the limited resources in Greece, mean that there will never be a complete solution to the problem. “You are organising chaos,” he said. This is something that his political masters should know all about.