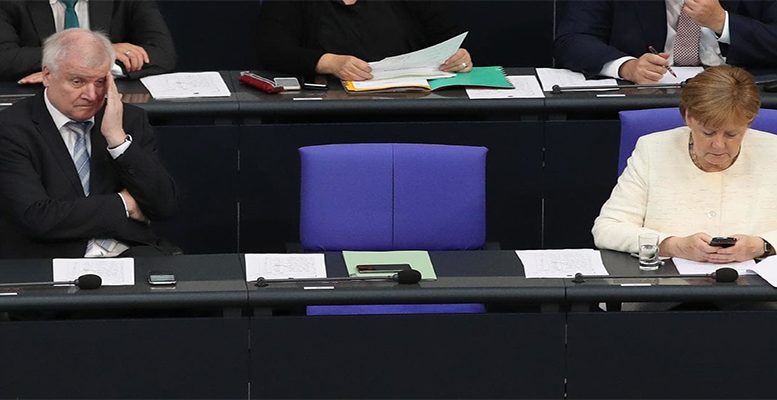 Trump is contagious. It is happening. The President of Bavaria,  Markus Söder, and the conservative Interior Minister, Horst Seehofer, both Social Christians, have nothing found the magic recipe to defend their Christian Social Union’s (CSU – coalition partner of Merkel’s CDU in Berlin) absolute majority in the next state elections in Bavaria in October. This is why both have been pushing the Germany first politics in Berlin with the idea of winning in October. That this damages the coalition government of the CSU with Merkel’s CDU in Berlin is of secondary importance. Neither are they concerned about destabilizing the EU. They are not worried about damaging third parties: let the south sort out all the refugees it receives. Let it happen … Merkel against the ropes. They attack her and will continue to attack her on two fronts which offer populist support: that’s of refugees (Söder and Seehofer want Germany to stop accepting refugees who have sought asylum in another EU states) and the European solidarity budget, whiis also rejected by the Social Christian.

In this fight which symbolizes that in the EU, north against south, east against west, the socialists reject the transit centres which will be built on the Bavaria-Austria to determine how refugees have arrived in Europe. They will be closed centres where refugees will remain up to 48 hours until it Iscar decided whether to accept or expel them. With the excuse of keeping the populist Alternative for Germany (AfD) out of the next Bavarian Government, the Bavarian CSU has forced the German government to shift to the right. In the words of CSU Secretary General Markus Blume, “there is no need to abuse the European Vision”. And he concluded “The truth is that Emmanuel Macron says Europe first, but what he really thinks is France first.” Germany is taking a new political direction, a hard line to “avoid Germany becoming Italy” (Blume) and slow the advance of the xenophobic far right

How can Europe channel the flows of refugees without betraying European values? asks Peter Müller of the weekly Der Spiegel. Merkel’s proposal to reform European asylum law and spread the refugees throughout Europe has not prospered. There will be a wall. And the south will have final decision, above all Greece, Italy and Spain, the last countries in the chain of dominoes. Thus the crisis is transferred and postponed, with consequences for the European elections in Spring, probably marked by two fronts with populist support: immigration and money.

The money. There are no expectations of advances in economic convergence either. In June Merkel reached an agreement with Macron to approve an additional European budget for investment. But the response within and without Germany has been negative. Twelve EU countries have said no. The Bavarian CSU who govern with Merkel do not like the idea either. What remains for the chancellor? Peter Müller of the weekly Der Spiegel thinks that Orbán and Salvini, Kaczynski and Le Pen were waiting for something to happen like this: the fall of Merkel, as a belated consequence of her decision in 2015 to open the frontiers and save the Schengen, the Europe without controls on its internal frontiers. If Merkel fails, Orbán advances in Europe. Given that at this moment, Germany, together with Canada and France, is the model opposed to the USA of Trump.