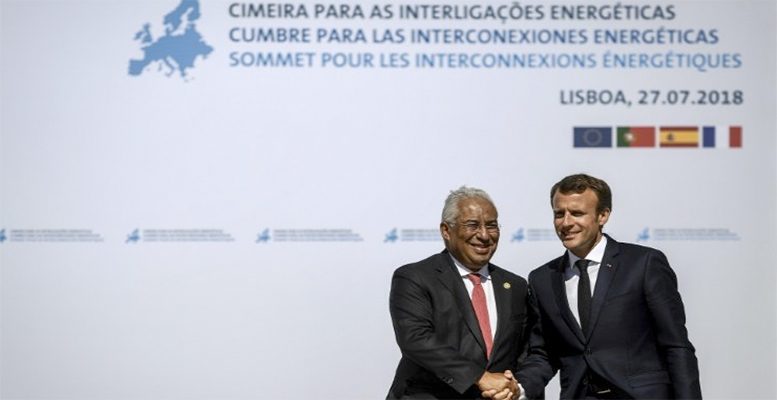 French President Emanuel Macron met with two southern allies, Spain and Portugal in his attempt to overhaul the European Union while Spain and Portugal are trying to get French help to connect the countries eenernergy grids to Europe.

The French President is especially trying to win support for a Euro zone budget, which the French see as a step closer towards an European integration. While Spain and Portugal are lacking oil and gas they moved ahead with developing renewable energy sources as wind and solar power with hope to sell their surplus electricity beyond the Pyrenees.

Portugal produced more power from clean energy sources in March that it actually needed marking the first time in the 21st century that renewables have topped hundred percent of its production.

Spain and Portugal are also lagging behind when it comes to gas connections. They are the only EU countries that cannot receive all their gas supplies through a network of interconnected pipelines from different suppliers. Both countries are expecting from the French President concrete projects so that the Iberian Peninsula no longer will be a kind of an isolated island on the European continent in energy terms.

But despite the fact that the expectations are high the differences remain while on the French side there is to hear only of increasing electricity links Spain and Portugal want to linkup gas pipelines as well. Madrid and Lisbon are also hoping that the Bay of Biscay project which will stretch high-voltage underwater cable 370 kilometers from Spain’s northern coast to southern France.

When the Bay of Biscay electricity cable comes in 2025 online, as expected, the interconnection capacity between France and Spain will double. It will reach to the level 5,000 megawatts while the European Union intends to contribute 578 million Euro to the Project. In regard to natural gas, Spain high hopes of becoming a strategic source for Europe in pushing a pipeline project called MidCat that would link Catalonia to France, allowing itto send some of the gas it imports from Algeria.

On the French side there is not much favour for Madrid’s ideas to find. The reason for the French hesitation is that the France wants to protect its nuclear power industry and the French energy monopolies in which the French state owns stakes, from foreign competition.

France is cautious about renewable energy, whose rapid growth has put hard pressure on the wholesale price of electricity/ New interconnections with Spain, so we hear from French sources, might undermine much needed investment in the electricity grid. This Spanish-Franco stand off over the Pyrenees power linkage illustrates the difficulties in reaching a higher amount of EU interconnection. The EU is dependent on outside imports for more than 53 percent of the energy it consumes.