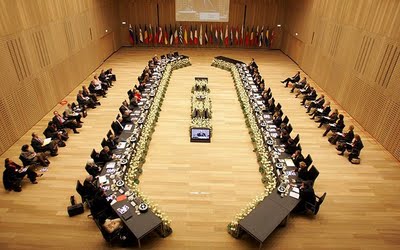 MADRID | Brussels seems to start taking growth into serious consideration. Up to now it follows the line that bringing deficit under tight control would be enough to trigger recovery, austerity standing as the only recipe to cure every shortcoming. The severe downturn that currently plunges European economies into utter disarray is casting doubts on the merits of such a simplistic view.

Countries having lived beyond their means face now a pressing need to readjust themselves to a demanding scenario. But reducing the problem to rush in balancing budgets fails to grasp where the main problem lies. It grossly overlooks that orderly deleverage to trim down excessive private exposure stands as the real challenge to put the economy on track. It seems to ignore that unless growth provides a helping hand there will be no way out. Focusing exclusively on public belt-tightening can only hinder that key move, especially should too ambitious deficit targets fuel open scepticism on reaching unattainable goals. Steep rises in risk premium represent a burden on public accounts. But their side effect on private financing exerts a far more devastating impact.

As usual, Brussels seems ready to accept its diagnosis to be far from correct. But it shows a blatant reluctance to implement measures in line with that acknowledgement. It is trying to downsize the commitment on growth by delivering some minor funding and a renewed emphasis on internal market measures. In a frantic effort to mend recent snubs to the best placed candidate in the French presidential race, Ms Merkel seems ready to take on board a number of François Hollande’s proposals. Like issuing common bonds to support major investment projects, so long earmarked money amounts to a limited scale. Too little, too late, should the pledge to revamp the ailing European economy be taken in earnest.

Furthermore, any concession will rest on the tight fiscal pact being previously endorsed. By sorting the French “malaise” with such a deceitful manoeuvring, Germany bets on paying a scant prize for salvaging budgetary discipline, its core and never-ending obsession.

Europe is clinging to the illusion that recovery can be achieved at no cost and refraining from any expansionary policy at all. Penny-pinching attitudes still prevail in the midst of a severe downturn. It stubbornly refuses to admit that setting out-of-reach deficit targets only leads to unsettle markets’ confidence and wreck any hope to reverse the dismal economic scenario. Countries benefitting with margins to implement a more dynamic stance forcefully rebuke any hint to invigorate their domestic demand. For all the foreseeable fanfare surrounding the coming debate on growth, it is more likely to produce hollow commitments and promises than tangible results.

Be the first to comment on "Brussels rediscovers growth"