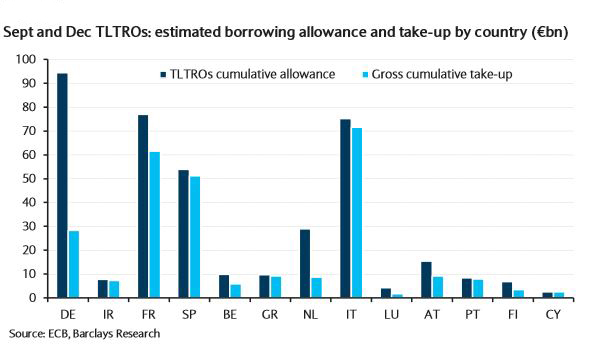 As Mario Draghi announced in June, the ECB will conduct in September the first of eight TLTROs with a bank’s borrowing capacity linked to its TLTRO-eligible loans to the private sector. The cumulative allowance for September and December TLTROs is ca. €400bn. For the remaining six, to be conducted on quarterly basis from March 2015 to June 2016, the borrowing capacity will depend on the evolution of net lending.

For the first two TLTROs, Barclays analysts expect “a cumulative take-up of about €270bn, of which ca. €110bn in September and ca. €160bn in December. Cumulative net borrowing is likely to amount to around €170bn.”

“The liquidity surplus should increase to c. €200bn after the September TLTRO and to €260bn after the December one. This, together with the sharp increase in the average OMO liquidity maturity, should favour an improvement in the liquidity conditions and contribute to keep short rates low and money market curves flat.

The market will focus on TLTRO results on September 18 and also on the 3y LTROs payback the following day to assess the surplus increase. The risk of disappointment is not low. With the ECB very unlikely to tolerate an increase in money market volatility, any sell-off is an opportunity to receive Eonia.

As a result, we think the TLTROs will achieve the target of keeping low rates for long thus contributing to support the economic recovery in the euro area.”

Yesterday, the Eurozone composite PMI came in at 52.8, one point down from July. While this outcome was below expectations (53.4), UBS analysts comment that it is not nearly as dramatic as many had feared after last week’s set of disappointing GDP data. So they think that PMI data set does not show neither the Eurozone is sliding back into recession nor Q3 will be another quarter of stagnation.

“Risks to growth continue to be on the downside, and we find it both appropriate and likely that the ECB will stick to its easing bias for the foreseeable future”, highlight Martin Lueck, UBS economist.

“For the ECB, we think PMI data does not provide any reason to change its view. Risks to growth continue to be on the downside, and we find it both appropriate and likely that the ECB will stick to its easing bias for the foreseeable future.“