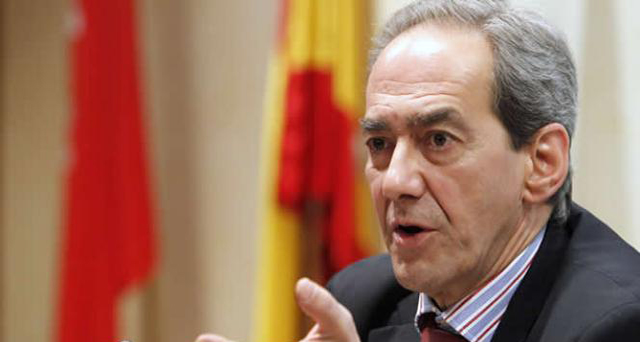 These are some excepts of the conversation between González-Páramo and The Corner staff:

“The ECB is a tool that the European banks have given to themselves to ensure stability and prices, to contribute to financial stability and –more recently, to take care of the micro-prudential supervision. It would be a risk for us if the ECB was a complete success, because if it functioned so good that more and more tasks are assigned to it, then the citizens would ask “well, if the ruling misters here haven’t been chosen, what kind of Europe is this?” When the ECB is asked to do more, it is because someone passes the buck of political responsibility by those who haven’t made the decision they have to make to move forward in the integration process.” That was the pronouncement of José Manuel González-Páramo, current director of BBVA and former counselor at the ECB, said in a conference organized by editors and contributors at Consejeros magazine.

In his opinion, “it is necessary to talk to the people and explain what Europe is. It is necessary to speak the same language in Brussels, Madrid, Berlin or Paris. We cannot be in Madrid and say, ‘this is something that Brussels is imposing’, as if it didn’t have anything to do with you. The issue of Europe is serious business: it means sharing sovereignty. I think there is a problem of irresponsibility and little political maturity within European institutions, which we should consider. We won’t get out of this impasse by saying to the ECB “look, you have to do all you can –quantitative easing and whatever it takes, to keep on going like we are” (i.e. numbed by a liquidity surplus, which is not free and has its risk).

“When someone asks about bubbles, there is a reason: ample liquidity that looks for profitability. But, even if the institutions that we have created look for the macro-prudential stability, those macro-prudential supervisors are not infallible, so nothing can be ruled out. Therefore, a change in the mandate would be a mistake. There is nothing that the ECB cannot do today, with its current mandate. But it is obvious that there is an area of activity that it should not cross: the political lines –and I think the ECB has excessively crossed them. I know that the ECB is not confortable playing the role of promoter or persuader of institutional reforms –just like one cannot imagine the FED, Janet Yellen or her predecessor Mr Bernanke telling President Obama what to do about immigration policy or in electoral legislation.”

Regarding the comments (by Munchau, Podemos…) about the convenience of restructuring sovereign debt of some southern countries, González-Páramo explains:

“What makes Western countries different from others is their motto ‘debts must be paid’; this is a norm. However, this cannot be guaranteed every time and everywhere and there will occassionally be an accident. It strikes me that the discussion about default or restructuring is because it is very popular to say: ‘do we owe 100? Well, it is OK if we give 50 because I don’t have the rest or because I don’t feel like giving it or because it is immoral for me to give it or because I don’t like giving it.’ For me, there are tough debt restricting tools, and there are ways to make debt to be paid or allow it is be paid more easily –provided the other party, which owns that debt agrees. This is something that nobody likes, but the aim is to recover the investment. This discussion makes no sense in Europe and I don’t think it is responsible to publicly promote it. We cannot help that there are political forces that use these ideas to make their fortune. But this shows a lack of responsibility.”

Finally, with respect to whether or not there is a bubble in the debt of these countries, he explains:

“I don’t think there was a bubble, quite the opposite –although I don’t know what name it should have. At that time, during the euro crisis, the spreads almost reached 7%. Now, there is a recovery. I agree that we are not living in a full banking union, because banks usually gather debt holdings within their own sovereign. There are many ways to avoid this, which needn’t be adding more risk weights to portfolio debts. An example would be setting concentration limits. We are so used to concentration limits in investment by banks in industries that I don’t understand why this is not considered as an alternative to risk weighting of sovereign debt. Thus we would have a risk-free asset, which wouldn’t be able to own excessive holdings. Maybe people won’t be pleased by this option, because there are countries where they wouldn’t understand that their sovereign should be subjected to limits. But then, let’s speak clearly. There are different ways to fight the risk concentration, which are not based on risk weight on the sovereign debt.”