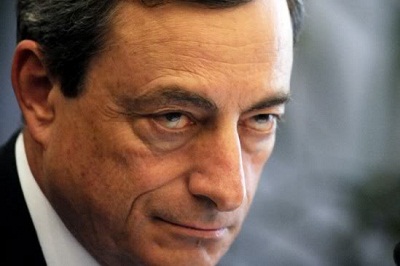 By Julia Pastor, in Madrid | The very logical answer from the European Central Bank’s president Mario Draghi to the Spanish claim for that institution intervening was a rejection. Instead, Draghi demanded Thursday that European leaders make up their minds on how the euro will be in a year’s time.

“Can the ECB fill the gap left by the lack of governance in the euro zone? The answer is no,” he concluded.

Draghi replied with these words to the question raised by the Spanish People’s Party MEP Pablo Zalba, who complained that

“markets are punishing exaggeratedly and without  justification some countries that are solvent and taking the right measures.

“It is unjustified a Spanish risk premium reaching to an all-time record when the Spain’s government is firmly committed to fiscal consolidation,” Zalba regretted. He also wondered whether what markets are punishing is “the lack of action and commitment in the euro zone to defend its currency and its members.”

The ECB’s president answered Zalba that, due to the dramatic increase of risk aversion, markets are now demanding governments a much more severe action regarding fiscal affairs and other reforms.

Furthermore, Draghi thinks the best recipe to stabilise the situation is not the ECB’s intervention, but that the European leaders clear up their view on how the euro will evolve in the next years, as well as to fix the schedule and conditions that should be complied to achieve this goal, in the same way it was done when creating the single currency.

“This is the most important contribution that our leaders can make for growth, and this contribution will be translated into debt risk premiums and risk aversion reductions,” Draghi said.

In Draghi’s opinion, the first step is to create a banking union based on three grounds: the creation of a deposit guarantee for the European system, the setting up of funds to prop up systemic entities, and a further centralisation of banking supervision.