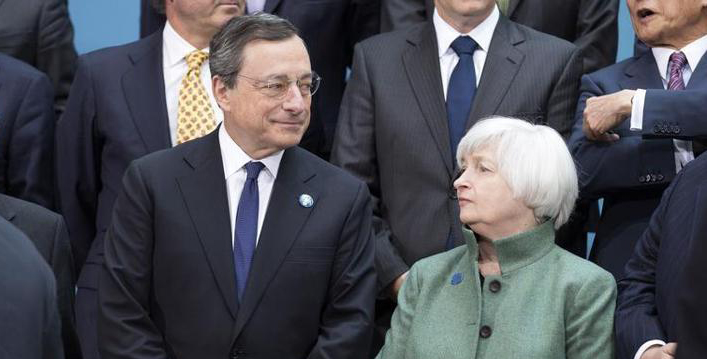 While Janet Yellen delivered a lukewarm speech on employment figures that left the markets wondering what kind of rate policy the Fed might implement, Draghi called for urgent action by Goverments to redress the Eurozone economy. He drew a dismal picture pointing to the combined risk of stagnation and plummeting inflation levels. His blunt acknowledgement that the bold monetary measures put in force recently had failed to curb the downwards trend, astonished the markets and prompted a sharp fall of the Euro.

Investors are discounting an early triggering by ECB of a massive asset buying plan. Yet, Draghi carefully avoided to take that move for granted. Instead, he advocated a flexible approach to budgetary discipline, coupled with serious efforts to implement structural adjustment measures. In other words, he emphasised the need for fiscal policy to support monetary loosening in tackling the current recessionary spell.

His words bring staunch support for Renzi’s resolute drive for a growth-aimed policy mix. They are also bound to comfort the French government,  struggling painfully with a deeply entrenched public deficit gap as growth fails to materialise. While it seems likely that extra time will be provided for countries unable to meet their targets, fiscal restraint will prevail. Germany and other budgetary zealots will refuse to do away with a discipline they regard as the cornerstone for economic stability.

Don’t expect any deviation from the current path towards fiscal virtue. So long as core Eurozone countries maintain a balanced budget regardless of the grim growth prospects, others will be forced to follow suit. Only the ECB is able to stimulate expenditure and avoid stagflation. Draghi has to stand up to his own diagnosis. If he believes the serious outlook needs urgent remedies, he should act on his own, instead of placing the onus on Governments. The sooner he implements a broadbase asset buying plan, thus alleviating public and private liabilities and fostering expenditure, the better.