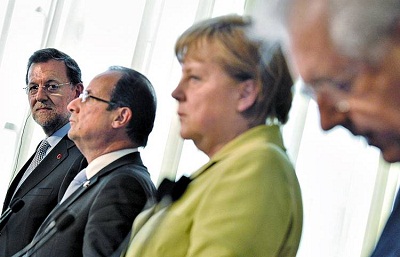 LONDON | It is a raging war what today burns within the Madrid-Rome-Berlin triangle, and with the survival of not only the European common currency but the future of the United States of Europe at the epicentre of the negotiations. Painful obedience has evolved into a tense, dynamic partnership. The stiff stillness imposed by the German Chancellor Angela Merkel as the most powerful economy representative has for once been broken at the end of this week's euro summit.

The euro periphery middle weights, Spanish president Mariano Rajoy and Italian prime minister Mario Monti, have shown their tactical muscle. The financial crisis was not resolved Friday, but the story has irremediably been turned over. Berlin is now aware that its diktum can be challenged, and successfully so.

Most short-term measures agreed this morning favour Spanish and Italian demands. Particularly, Rajoy seems to have gained the match: the soon-to-be-set European Stability Mechanism will actively recapitalise failed banks of the euro zone and buy sovereign bonds, protecting State budget deficits from further stress and giving up its seniority preference instead of getting repaid before private investors are, for example.

The markets liked in the first hours of Friday's session the new status quo. The euro rose from 1.2460 to 1.2580 against the US dollar and the British pound retreated from 1.2500 to 1.2420 for euro. More importantly, yields on Spanish and Italian 10-year government debt fell by 50 basic points.

The other points revealed today from the euro summit's outcome have, too, earned some friendly words from the City of London. Kames Capital&#0

“Although the reality may be that these steps prove to be at best baby ones, they are none the less bigger than markets had been expecting […] Supervision of the banking system by the European Central Bank has positive implications.”

And Tim Kirkham, director at currency specialist HiFX wondered if the euro area is finally walking towards its complete integration.

“For us, this is a real step towards a more cohesive Europe and perhaps the euro can rest on the ropes for a little while. These euro meetings could grow in importance in the coming weeks as we watch for signs of a reduction in Merkel's intransigence.”

“The proposed introduction of a new single banking supervisor run by the ECB which could lead to funds been directly injected into the banks is a real positive step in the road to greater eurozone unity. By granting banks unsecured capital outside the individual states control, individual European governments are escaping the financial noose that previous proposals created. This means that governments can raise capital via bond markets for spending needs, supporting their economies, rather than shoring up liquidity tight financial organisations.”

Rajoy and Monti would strike a fatal wound in the heart of the upcoming United States of Europe, though, if they misuse the new-found ability to share power in Brussels. After all, unanimity is still required for the euro rescue funds to intervene in the bond markets, and any sort of bailout, whether banking or national, will come with attachments in the form of sovereignty transfers, reforms, and conditions over public spending.

Spain and Italy must now teach Berlin that they can put their finances in order and understand the urgency of being austere by themselves.