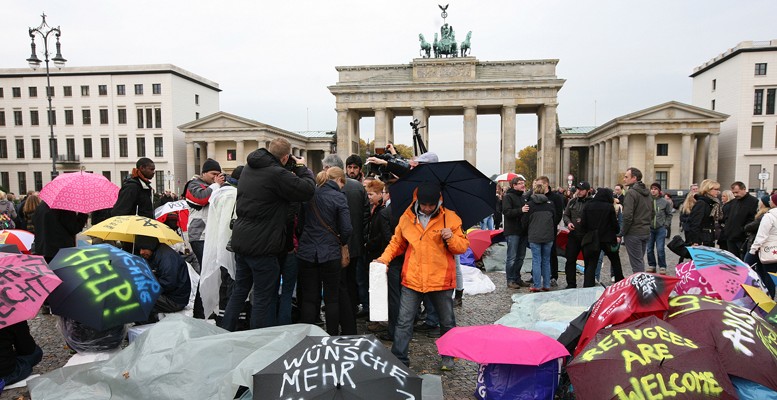 What future is there for Europe if each country understands the European destiny in its own way? The aim is to stabilise the euro. But each country has a different solution for achieving that. Which, of course, is in each one’s best interests. The aim is to overcome the refugee crisis. But everyone is looking out for themselves. Germany wonders whether Europe wants more Europe at Germany’s expense. Refugees? All for Germany. Désolé, sorry, say the British, the Dutch and the French, who think they already have enough foreigners. To guarantee the euro’s stability? Of course, by mutualising European debts, unemployment and deposit insurances. But who will risk more with this mutualisation? For now, Germany says nein.

And at the centre of all the debates is Germany. Whatever it does, it upsets the apple cart. If it calls for austerity to boost European competitiveness and growth, that’s bad. If it asks for shared responsibility in the face of the refugees’ arrival, that’s bad too. The Hungarian conservative Viktor Orban, who has built a wire fence along the borders with Serbia and Croatia, accused Merkel of moral imperialism because the chancellor is demanding a united response to the refugee crisis. Germany is alone. The East refuses to cooperate and the South is not in favour of mutualising the cost of the refugees’ influx.

“Germany is being forced to resolve the crisis alone. A disappointing loneliness considering that the Germans paid a large part of the bailouts’ bill and the implicit debt mutualisation as a result of the ECB’s management,” in the view of the controversial, but influential economist Hans-Werner Sinn (Ifo Institute). And apart from being alone, Merkel is under pressure. Although the Germans are not as reluctant as other European citizens to take in refugees, and are a far cry from the French who are proposing tougher measures to stop their arrival, German public opinion is hardening.

However, Germany is the most affected country by the migration wave because it is the destination of most refugees, as well as being the country most willing to accept asylum seekers. More than three out of four German citizens are in favour of their reception and distribution in Europe. And this is regardless of their political orientation. Italy and Spain are the two EU other countries which have shown the most solidarity.

The magnitude of the problem is extraordinary. Only a handful of refugees have been relocated in Europe. Germany could receive up to one million and a half asylum seekers in 2015. Almost all of them go to Germany. Some go to Sweden. But the great challenge is not just that Europe needs to work together to strengthen external borders and reach agreements on readmission of immigrants without the right to asylum. The refugees also have to accept being sent to this or that country and remaining there.

We know what Europe is up to. Hungary says the crisis is a German problem. Germany complains that Austria takes the refugees “without notice and at night” to the German border. Austria will put up a fence on the border with Slovenia, where thousands of refugees are waiting to get into Austria. Slovenia proposes closing its border with Croatia. And Hungary has already built a wire fence along its borders with Serbia and Croatia. Long live the Schengen area!

Meanwhile Brussels tries again and Jean-Claude Juncker’s team warns Germany that they want to strengthen the euro. To do so, they want a banking union with deposit guarantee schemes and a fiscal advisory council of the Commission, which has a consultative character and is able to express an opinion on budget control.

But it is not so clear for Germany that it has to resolve the refugee crisis alone, while demands are also being made on them to take on debt mutualisation or eurobonds. They consider as unacceptable the plans for mutualising national schemes to endorse the deposit guarantee. “Our goal is to reduce the banks’ risks, but regardless of the state ones. A common deposit guarantee is not compatible with that goal,” says the German Finance Minister. Nor does he agree with the role of the European Commission in budgetary control.

It is understood that a Treasury and eurobonds are needed to guarantee the euro’s stability. At the expense of Germany? And if there is no progress, Germany is accused of disrupting the European project. Is it like that? Who is unable to share responsibilities? Merkel’s government is accused of wanting to create a more German Europe and that providing financial support for the EU is not enough.

“Germany refuses to accept that its hyper-competitive economic policies, reflected in its surplus, are one of the causes of the eurozone crisis and one of the main obstacles to its solution. Instead it seeks to impose its will on other countries,” says Philippe Legrain from the London School of Economics.

Should the German government encourage its local companies to lose their competitiveness to help businesses in the rest of Europe become more competitive? No-one can imagine the French government suggesting that its industries lose competitiveness in favour of other countries. There is little difference between the value of Germany’s exports and imports within the EU and the eurozone. Germany sold 414.200 billion euros and bought 411.400 billion euros in the euro zone. Its surplus is due to the exports to third countries outside the EU. In total, it exported 1.13 trillion euros in 2014. Especially cars and machinery. Would Spain sell more vehicles or machines to China if Germany did not do so?