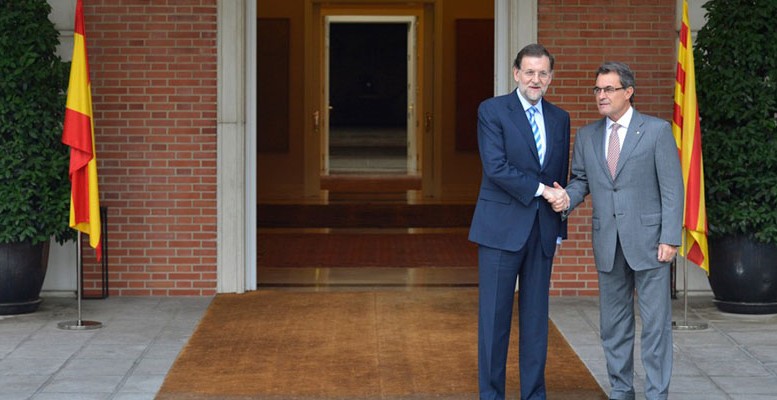 We can say that Spain’s glass is both half full and half empty. Let’s first accentuate the positive. The economy is expanding at an annual rate of 3.1%,  higher than the eurzone average (1.8%). But Spain is not the fastest growing country in Europe – as Rajoy continues to insist – because there are five others which are expanding faster, beginning with Ireland (6%).

Something the same is happening with employment. After years of strong job destruction, there was a slight recovery last year (at a rate of 1.4%) and it is now growing at 3-3.2%.

And consumption is relatively strong: new car sales are rising at an annual rate of 24% and the Consumer Confidence Index has been slightly over 100 for some months (the range is 0-200).

But not all the economic data is good. The trade balance shows that domestic demand is fuelling imports, which rose 6.7% in real terms in the eight months to August, while exports are growing at a much lower rate (3.7%).

The other indicator which shows that there are still unresolved structural problems is the public deficit which the European Commission has said will reach 4.7% in 2015, compared with a previous commitment to 4.2%.

And on the other hand, there is the unfavourable trend in the Social Security accounts. Although the job creation rate is now sustainable, subsidies to companies and lower salaries (due to internal devaluation) mean that revenues are growing at a lower pace than expenses.

In the political arena, the glass is more half-empty. The Unilateral Independence Declaration which the Catalan Parliament has just approved fuels concerns that, irrespective of how the conflict evolves, there will now be a period of heightened tension. There will be no positive outcome from this and it could have been avoided if the governments in Madrid and Barcelona had not been so short-sighted.

Spain’s future governance does not look easy because the new executive emerging from the December 20th elections is likely to be a coalition or a minority one, with very complicated and unstable parliamentary support. This is an unprecedented scenario on the Spanish political scene since democracy was restored. A Popular Party-Ciudadanos government? Or a socialist party-Ciudadanos executive? Or a minority government with eventual pacts? Or even less likely – a socialists-Podemos- IU government?

Amongst all this uncertainty, the positive point is that the improvement in economic growth is enabling the resurgence of traditional parties, which suscribe to the European model (PP and PSOE). Podemos, which talked about debt renegotiation and fighting against the economic policy set by Brussels and Berlin, is losing those who yearned for renewal. These people are now gravitating towards Ciudadanos’ liberal centrists who have a partly confused programme, but at least agree with the European economic model.

This stabilisation of Spain’s political map -which does not guarantee a stable government in the coming months- seems assured, following the recovery of the Economic Sentiment and Political Confidence indicators, both published monthly by the Social Research Centre (CIS in its Spanish acronym).

Considering the Economic Sentiment Indicator’s range is 0-100, it stood at 42.9 in October, still below the 50 average, but in March it was at 23.8. Furthermore, the sub-index of expectations is already over 50, which indicates optimism about the future.

As for the Political Confidence Indicator, it is still below the Economic one at 38.1, but it grew by more than 31.4% annually.

Two other figures to finish. One good, one bad, reflecting Spain’s circumstances.

On the one hand, Standard & Poor´s raised Spain’s debt rating to BBB+, thus boosting international confidence in Spain. And on the other, Spaniards of working age account for just 59.5% of the labour market, compared with 73% in Germany, 71% in the UK, 68% in the U.S. and 64% in France.

Spain still has serious economic and social modernisation challenges ahead. It is uncertain whether the domestic conflict with Catalonia, or the upcoming election results, will allow the country to handle the situation with the speed, determination and clarity it requires.