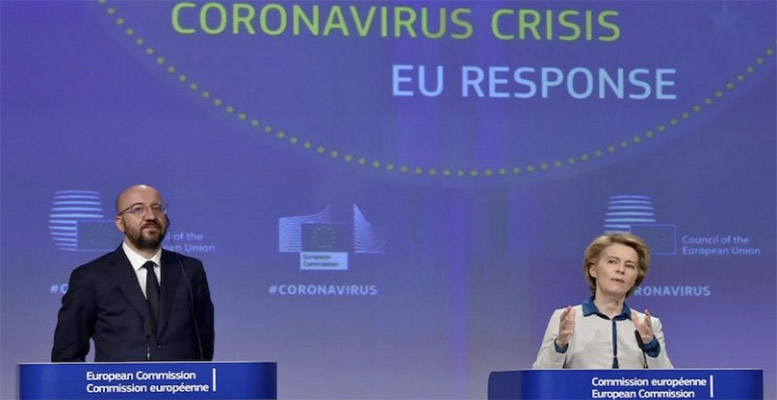 Monex Europe | Yesterday, the European Commission laid out its plans for a covid-19 recovery fund to the European Union, which is meant to reinforce the role of the Multiannual Financial Framework (MFF) as the main policy tool. The total financial firepower embedded in the EU budget is proposed to amount to €1.85 trillion, with the Next Generation EU fund of €750 billion to target the pandemic crisis, adding on top of the long-term EU budget for 2021- 2027. In addition, in order to respond to the most pressing needs, the Commission proposes to amend the current MFF 2014-2020 with extra €11.5 billion in funding available already in 2020. The news boosted the euro initially as the plans outstrip expectations for €500bn in funding previously proposed by Merkel and Macron.

The Next Generation EU fund, which is meant to address the eurozone’s main financing needs to counter the crisis, consists of €500bn delivered as grants according to country- specific financing needs and €250bn credited as loans. The overall €750bn fund will be raised by the European Commission in capital markets, reassuring investors with a high level of institutional endorsement, and therefore, increasing the likelihood of lower financing costs. This is key for southern European nations who have seen bond yields rise as the coronavirus hits their domestic economies hard, thus deteriorating their debt trajectory via lower growth and widened fiscal deficits. The announcement, in fact, prompted country specific yields on Italian, Spanish, Portuguese and Greek sovereign debt to fall for this reason.

The funding will be repaid back to creditors “not before 2028 and not after 2058”, which suggests the EC stands ready to issue debt instruments (bonds) up to 30 years, potentially designing a “full curve” structure similar to other public debt markets. These elements are critical in the sense that they resemble something closer to a single EU debt market, posing a highly credible alternative to the current safest asset in the Eurozone, the German bund, and some other global government assets like US Treasuries or JGBs. However, this isn’t to be confused with the topic of coronabonds. Coronabonds were suggested as a joint eurozone fiscal response to complement the monetary stimulus measures of the ECB, whereas today’s measures are to be implemented through more traditional mechanisms under the EU framework. The structure of the fund between grants and loans is, however, set to prove highly contentious among country members. The larger sum intended as grants implies that most recipients who will receive the bulk of the funds as transfers face no payback obligations, while the burden of the pandemic will be assumed by fiscally-stronger nations. The financing and distribution of funds has been a major point of division. Fiscally conservative nations such as Sweden, Holland, Denmark and Austria have raised concerns over the idea of non- repayable grants for the reason of limited returns for their input. Instead, they favour a full loan system or an alternative type of conditional credit mechanism. With such a strong view on the matter, as recent headlines would suggest, they pose the greatest resistance to the approval of the relief package in its current form. This comes despite Germany, who currently pays 25% of the 2014-2020 MFF program, recently altering its conservative fiscal position to stand behind the grant system.

The funding is crucially accompanied by a set of structural reforms on the EU fiscal guidelines, also likely to receive some criticism across member states. The proposal is intended to strengthen the single market, while guaranteeing a level playing field across countries and encouraging sustainable innovation investments. The repayment of the funds raised in capital markets and the interest on it is set to be financed by three main sources. First, increased national contributions. This could take the form of a shifting composition of payments to the MFF from member states, but is likely to take the form of an increase in the own resources ceiling, i.e. the maximum amount it can request from member states. Second, a reduction in policy support, ie. future austerity. Third, and potentially highly contentious, the introduction of new “own resources”. The options for these new own resources put forward by the EC range from expanding the already existing trading system based on maritime and aviation sectors, to taxation on carbon emissions, operations of large companies and digital services. The euro initially reacted positively to the proposed plan as it adds support to the ailing single market economy. A substantial and coordinated fiscal response has been missing from the eurozone, even with the limited stimulus coming from the ECB due to its capital key and interest rate constraints. For markets, it’s a case of better late than never, which was highlighted by the euro rally and tightening eurozone bond spreads, although this premise is likely to be tested in the coming weeks and months. Firstly, for the 2021-2028 MFF, the European Commission requires a political declaration from the European Council by July. This is the near-term stumbling block for the proposed plan in its current form as it faces political opposition.

The euro is becoming acutely aware of this as leaders begin to hit the wires with EURUSD hovering around the 1.10 level as the flash headlines flood in. Recent comments from Holland and German Chancellor Angela Merkel have highlighted the lengthy nature of negotiations around the current structure, causing the euro to retreat from session highs. Merkel explicitly stated that she doesn’t expect an agreement by the next European Council summit on June 18-19th. The nail was put in the euro’s rally after Austrian Chancellor Sebastian Kurz, a key opponent to the grant system, stated that the current program was “the starting point for negotiations”. The second risk factor is that the European Commission also requires ratification for its additional spending under the 2014- 2020 MFF program by September 1st such that it can release the extra €11.5 billion under this year’s budget. Going forward, the situation remains fluid and headlines highlighting how deep the political divisions are will likely dominate EURUSD price action. In this light, we expect volatility in the pair to be elevated, although this isn’t a view currently shared by options markets.