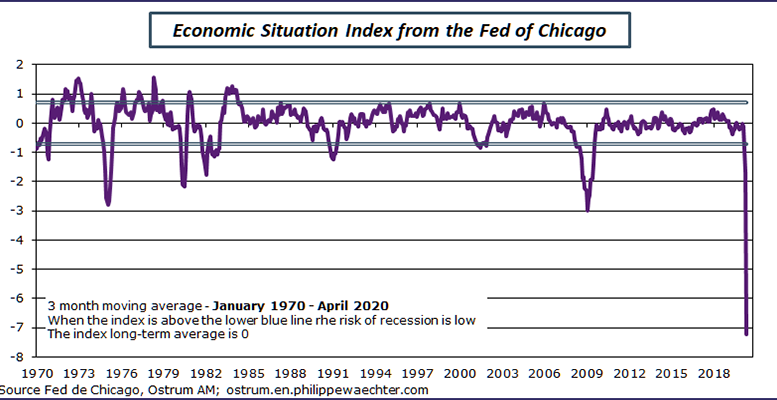 Philippe Waechter (Natixis AM) | The drop in activity in the United States is out of all proportion compared to the recessions of the past. A return to normal, to the dynamics before the health crisis, would suppose that all the sectors progress in a homogeneous way. It seems unlikely. As a result, imbalances will appear and will change the structure of growth. Employment will be penalized over time and will weigh on the level of GDP and per capita income.

The CFNAI index, calculated by the Chicago Fed, is the best measure of the economic situation as it is. It is a composite of 85 indicators published in one month. It includes industrial production, retail sales, employment and many more. It is published late compared to the surveys, but it perfectly reflects the state of the business cycle. It reads on average over 3 months and when it is greater than -0.7, the probability of recession is almost zero. Below this threshold, the risk of recession is high. See here for more details
In April, the index dropped more than 10 points to -16.74 from -4.97 in March. Its three-month average was -7.22 compared to -1.69 in March. The indicator is well below the threshold of -0.7. As the graph shows, The index is also well below the measures observed in 2008/2009. The shock is of a different kind and magnitude never before seen. This curve has the same pace as that of employment which in April contracted by 20.5 million.

It is likely that over the next few months the index will rebound and the crisis will ease. The major question will concern the ability of the economy to grow in a homogeneous and coherent manner in all sectors of activity. It is likely that sectors find a very high trajectory, that this is the case for all is doubtful. These shifts will cause imbalances that will undermine growth and its structure. The return to growth equivalent to that of the pre-crisis will take time, the time to resolve these imbalances and create new poles of expansion.

The risk is that of a hysteresis on the job. The health shock would then have a persistent effect on employment, which would be unable to return to its pre-crisis level. In a recent paper, Nicholas Bloom, José Maria Barrero and Steven Davis estimate that 42% of the jobs cut recently will be permanently lost. This suggests that the level of employment will not revert to its previous level. GDP and per capita income levels will be affected for a long time.