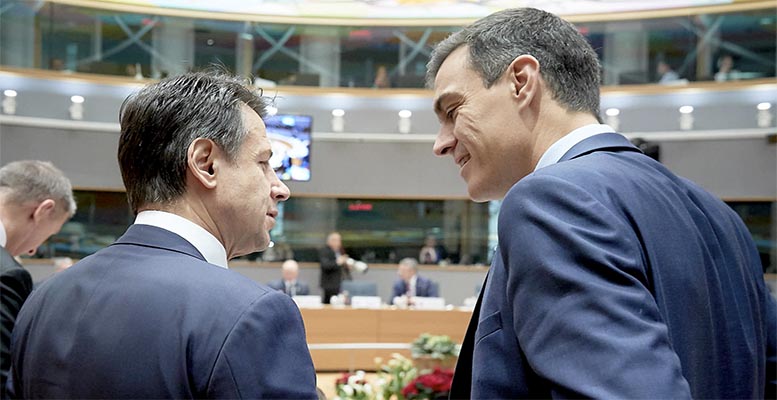 Santander Corporate & Investment | The plan called “Next Generation EU” and the bazooka of 2.4 trillion euros from the EU achieves greater convergence between peripheral credit and that of core countries. The 2021/2024 Recovery Fund exceeds the Merkel/Macron proposals with an amount of €750 billion euros (equivalent to 5.4% of the EU27’s annual GDP). This includes €500 billion euros in grants proposed by the Franco-German axis but also €250 billion in credits as requested by some northern countries. And Italy and Spain would be the countries to most benefit. This was something that was quickly reflected in the performance of peripheral credit on Wednesday, especially in the financial sector, with improvements on average of about 10bp in the CDS of banks in both countries. This proposal must now be approved by the European Council (18/19 June – the European Commission (EC) expects it to be no later than July). A tough debate is foreseen as it requires unanimous approval. The proposal adds to the EU’s long-term budget of 1.1 trillion euros (MFF 2021-27 – 1.1% of annual GDP). But also to the initiatives already approved by the European Council worth €540 billion euros (ESM, EIB, SURE). So the total amounts to almost 2.4 trillion euros.

The periphery, the most favoured region

The proposal for large subsidies, the distribution of these and the expectations for next week’s ECB meeting keep the commitment to more convergence alive over the next few days. For some days there have been different hints coming from many ECB members about the need for more QE (also reflected in the minutes published last Friday). And in fact yesterday, the central bank’s President Christine Lagarde recalled that the ECB’s 2020 GDP estimates have changed and that the scenario of a moderate recession no longer exists. The new forecast is now for an 8-12% contraction (vs the previous 5-12%). But it should not be forgotten that there are still many unknowns. The first is how the negotiations for the approval of this EC proposal go. The second is what conditionality will be included in this aid and credits. And the third concerns the distribution of these funds. For the moment, the press points to Italy as the most favoured country with 81.8 billion euros in direct transfers and 91 billion in loans. It is followed by Spain (77 billion/ 63 billion), with France and Germany receiving transfers of 39 billion and 29 billion euros, respectively.

The EU will become the first net issuer in Europe, with issues of €750 billion between now and 2024 and maturities of between 3 and 30 years. The funds would be paid out of the EU budget (the EC is proposing to temporarily raise the ceiling of the EU’s own resources to 2% of Gross National Income and guarantees of over €100 billion euros for joint debt issues). But also with new revenues such as the carbon tax at the border (which it estimates could generate 5.0-14.0 billion euros), emission rights (close to 10 billion), the digital tax (1.3 billion) or a tax on large corporations (10 billion).