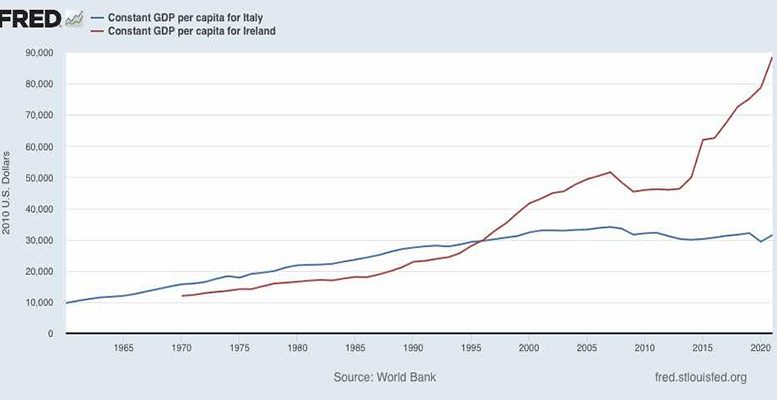 Miguel Navascués | Giorgia Meloni’s election victory is a new warning to the errors of European bureaucracy, to the stiff Commission, to the false and undemocratic Parliament, and to the no less disoriented European Central Bank.

Italy is fed up. It is fed up with this Europe, it is fed up with the Euro (which, it thinks, prevents it from growing with dignity and makes it long for its Lira, its wet dream with which it had lived and grown so well since the post-war period, with its magic, the magic of devaluations). Italy has not been growing for more than a decade, and its per capita income is falling. Italy is fed up with the immigration decided in Brussels. Looking at the data, who can be surprised

Whose fault is it? The Italians’, or Brussels’, as they believe? I don’t know, but what is clear is that the Italians, the soul of Italy, have not fitted in well with this bureaucracy in which, by the way, other countries are following the same path. Compare the result of fitting well (Ireland) or not in the European bureaucracy, it is an eye-watering comparison. Ireland was a country that was intervened after the 2008 crisis – as can be seen in the figure.