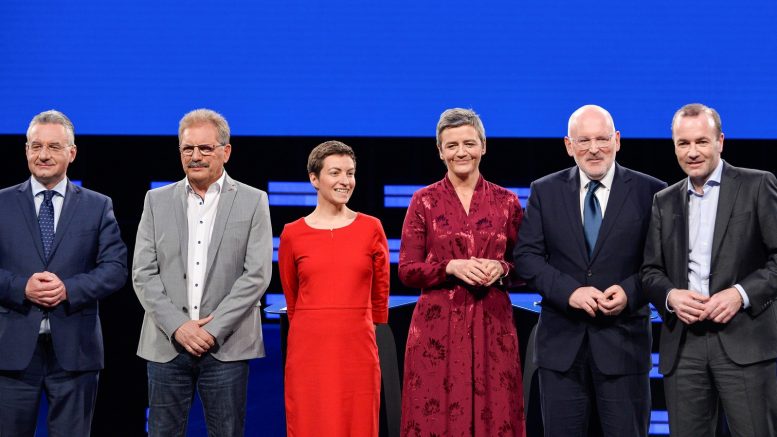 Ana Fuentes (Brussels) | In a week´s time we will know the results of the European elections, the road map of the EU in a delicate moment of great fragmentation. For the European institutions the most urgent is that citizens vote, given that in 2014 abstentions exceeded 57%. The great paradox is that the Union enjoys today the highest approval rating by its citizens since 1983, according to the latest surveys by Eurobarometer and think tanks like the European Council for Foreign Relations (ECFR). And yet never have so many voters feared that the project will disappear or weaken. Mark Leonard, director of ECFR, points out that the challenge for pro-European parties is to take advantage of this fear to mobilise the undecided majority, or else they won´t vote.

Last Wednesday debate in Brussels, transmitted live in 23 languages, symbolised well this crossroads. Both the representative of the European Peoples Party, Manfred Weber, and the leader of the socialists, the current vice-president of the Commission, Frans Timmermans, spoke of reforming the current project. The German Weber, like all in greater or lesser measure, thought the key lay in taking legislative initiative. He did not want to generate headlines, unlike Timmermans who made studied impacts to the extent of mentioning Game of Thrones. The Dutch candidate was critical of austerity and argued for a European minimum wage, an issue which according to Commission sources could reduce his chances of securing the presidency of the Commission because of its rejection by Eastern countries.

The People´s Party, socialists and liberals agreed on some points, especially on taxation of companies. The Competition Commissioner, Margrethe Vestager, who represents the Liberal Party and who has gained a reputation for fining Googles and questioning the business model of the American technology giants, proposed a minimum corporate tax. She commented: “For me, a fiscal paradise is a place where everyone pays their taxes”. Timmermans proposed a Union consensus of 18% for firms.

The Greens, headed by Ska Keller, obviously insisted in the needs to prioritise action on climate change. They demanded unblocking the migration policy to put an end to deaths in the Mediterranean. Nico Cué, from the European Left, insisted in the idea of establishing a Union for people rather than markets.

The Europhobes were missing because they refused to take part. Europe of Nations and Freedom, where Marine Le Pen is active, and Europe of Freedom and Direct Democracy, the group of Nigel Farage, refused to step into the parliament, converted for a few hours into a television studio. The only Eurosceptics present were the Conservatives and Reformers. Their representative, the Czech Jan Zahradíl, argued for a Europe focused in fewer issues, but with greater emphasis, and a Commission which gives more power to national governments. It is still not clears how much, but it is certain that these groups will win greater influence in the new parliament.

In Brussels they are talking about the end of an era. For 60 years, socialists and peoples´ party have governed in a grand coalition, but now it is thought that they will not get the necessary votes. In the next few months they will have to negotiate with other political groups. To think in the classical left-right divide is a mistake. What matters is playing out in a cross bordering way: those that believe in Europe, although they question it in many areas, versus those who seek fewer concessions and more returns, more power for the sovereign states, even thought they receive European funds.