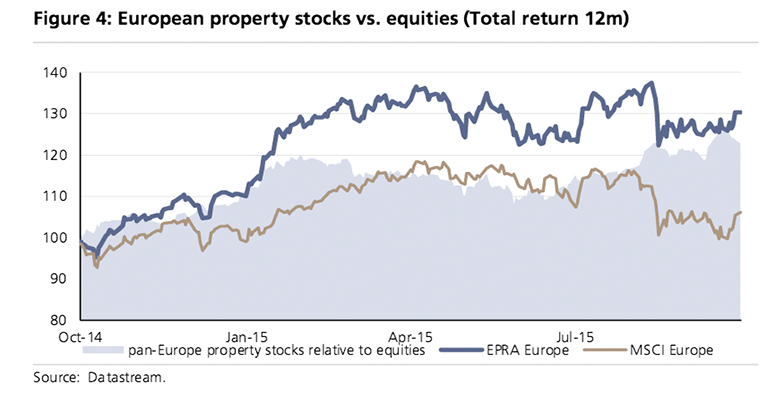 UBS | We remain constructive on the European real estate sector. As a bond proxy with growth , real estate benefits from current central bank stimulus, while it can also gain through rental growth in an inflationary environment, should the stimulus prove successful. We view current valuations aren’t stretched, and in the UK seem to be pricing in an impeding end to the cycle. However, our new Evidence Lab study suggests at least two more years of London office rental growth, while our new ‘health check’ shows other markets are improving. Hence we see 11% forward RoE and further upside to stocks.

Where are we in the cycle? We tackle in two ways: (1) what company positioning is telling us; and (2) Our own analysis on underlying property markets, including UBS Evidence Lab proprietary work. UK REIT positioning undoubtedly points to late cycle, but companies are much more conservatively positioned than in previous cycles. LTVs are already lower (average c.30%) and trending down (despite more conservative valuations today) and committed development exposure is less than one – third that of the 2006 – 07 bull era, in some cases. Thus: don’t expect 2008 NAV discounts to repeat.

We have flexed assumptions for NAVs, and in a bull case (bond yields rise but property yields revert back to 2x average spread), values could rise a further 3 5%, and peak NAVs could be 65% higher than current. Even if stocks price in a 40% discount to peak NAV (we think they won’t, see above), that is in line with current share prices. A 20% discount would imply c.35% upside on today’s share prices.

We see 12% total return potential on average across our coverage, and more for our top picks Land Securities (22%), Hammerson (25%), Hispania (16%) and ADO Properties (13%). For Spain, we upgrade Hispania to Buy and downgrade Merlin to Neutral.

A wide valuation gap has opened up, given Merlin’s strong performance (+48% since IPO) and Hispania’s recent 15% retreat. Spain is the only major market in Europe where rents have fallen significantly and are only just beginning to recover in the CBDs. This, plus strong GDP growth forecasts for the coming two years (3.2% 2015 and 2.6% 2016; UBS economists) mean investor interest is strong, both in the direct market and for the stocks in our view.

The UK trade s at an un – stretched 1% discount to NAV, having recently de-rated from a 10% premium. The continent trades at a modest 12% premium, reflecting its earlier stage in the cycle.