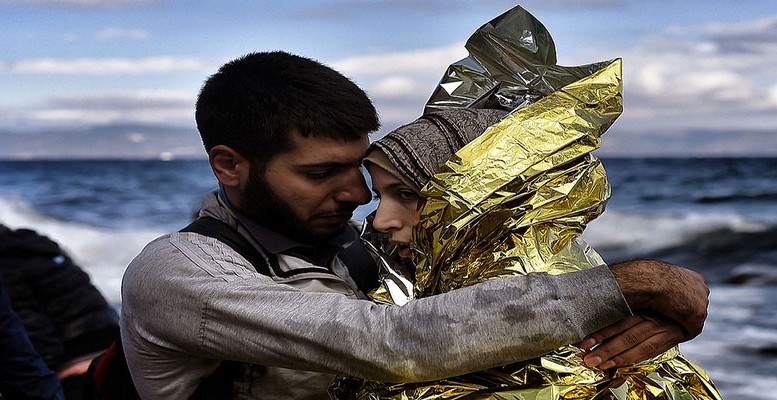 Nick Malkoutzis via Macropolis | The nexus of Greece’s most challenging problems, and perhaps the ones that will make or break the current government, were indirectly highlighted by Prime Minister Alexis Tsipras last week. In comments to the Wall Street Journal between a multitude of appearances at the sidelines of the United Nations General Assembly in New York, Tsipras indicated that his government might not have the money necessary to look after the soaring number of refugees and migrants arriving in Greece this year.

“Our goal is to agree with our (European) partners that if the situation deteriorates, the funds that Greece will spend will be excluded from the calculation of the deficit,” said Tsipras, tracing a line between Greece’s economic difficulties and the challenge of dealing with the dramatic influx of people fleeing war, destruction and economic dead-ends.

The amount of people arriving in Greece is just mind-boggling. According to the International Organisation for Migration (IOM), roughly 34,500 people arrived in 2014 but already this year there have been more than 400,000 arrivals. According to the police, almost 187,000 migrants and refugees have arrived in Lesvos and are still crossing the Aegean to do so at a rate of 3,000 a day.

Understandably, this has put a huge strain on the Greek state’s resources. No country could easily cope with a tenfold increase in the number of unregistered people reaching its shores from one year to the next. The first SYRIZA-led government, though, did itself no favours by being thoroughly unprepared for this wave, which had been building since the start of the year. The bulk of arrivals have occurred since May.

The previous minister for immigration policy, Tasia Christodoulopoulou, appeared to adopt a laissez-faire approach (probably the only time the phrase will be associated with SYRIZA) to the whole issue. SYRIZA has long advocated an open immigration policy and Christodoulopoulou’s idea seemed to be just to welcome the thousands of people arriving and usher them on to other parts of Europe. However, Greece was not in a position to deal with even the humanitarian implications of this policy: NGOs, charities and, in many areas, volunteers picked up most of the slack. The state’s failure to register people properly caused resentment in the rest of the European Union. The government’s approach was an all-around failure.

Tsipras appears to have recognised this in his decision not to bring back Christodoulopoulou and to keep the caretaker minister, Yiannis Mouzalas, in the job. Being one of the founding members of Doctors of the World, Mouzalas has a long background in humanitarian work and his quick moves to ease overcrowding on Aegean islands, such as sending more fingerprint scanners, showed that at least he understood the urgency of the situation.

However, moving towards winter the challenge for the Greek government will change. Arrivals by sea will drop off but there will still be great pressure to register and house the refugees and migrants over the months to come. The need for administrative work and logistics will be as pressing as that of humanitarian aid. And, yes, this does require significant funding, as Tsipras indicated in his comments to the Wall Street Journal.

The European Union has also had somewhat of a delayed reaction to a problem that until recently only affected its outer borders. It increased the emergency funding for the migration crisis by 73 million euros and the European Commission will propose spending another 100 million euros before the end of the year. Another 1.3 million euros has been directed at the three relevant EU agencies: Frontex, Europol and the European Asylum Support Office. However, the scale of the problem means that much more will need to be spent in the months to come. Housing, feeding and keeping people warm carries a much higher cost than scanning their fingerprints and recording their details on a database.

Whether Greece’s expenses will reach a level that means there should be a discussion about whether they must be excluded from deficit calculations remains to be seen. It may depend on whether Athens is able to live up to the role that its EU partners believe it should fulfil as a point of entry. The European Commission was very clear about this following the recent emergency summit on migration. “Greece will notably need to ensure adequate personnel is appointed to the Asylum Service and First Reception service; put in place an effective return system; improve the absorption of EU finds and address the reception needs arising from the increased migratory flows,” Brussels said in its statement on 23 September.

Kathimerini revealed last month that Greece had failed to absorb tens of millions in EU funding for migration issues because it had not yet set up a service to manage these resources. If Tsipras cannot put his own house in order, it is difficult for him to then argue for Greek spending to be exempted from deficit calculations.

Setting aside the financial issue, what is required from Greece now is a clear plan, a methodical approach, a high level of organisation and the willingness to see things through. In this sense, there is a much stronger parallel between the refugee crisis and the way Greece is dealing with its economic crisis. Greek decision makers are being asked to shake off their ineptness and work together to tackle the problem.

If they are looking for inspiration then perhaps the way that almost 1.5 million Greeks from Asia Minor were resettled following the population exchange in 1923 can provide it. Then, as now, a destitute country with poor administrative capacity organised itself and with the help of partners (the League of Nations’ Refugee Settlement Commission) was able to meet the challenge.

Last week’s move by Athens municipality and the central government to take hundreds of migrants who had been living out in the open, particularly in Victoria Square near the city centre, and place them in former Olympic venues provides some hope that the necessary steps will be taken to ease the humanitarian impact of this extraordinary situation. The next step is to ensure a proper registration process that will put the rest of the EU at ease and lay the foundations for the relocation of thousands of refugees, as agreed by EU leaders in September.

However, Greece will also be expected to detain migrants – who unlike asylum seekers will not be eligible for relocation – and then repatriate them. This poses a different type of challenge for Tsipras as SYRIZA has traditionally had a very migrant-friendly philosophy. If his government is struggling to care for refugees and, at the same time, has to round up and detain migrants, will the prime minister face a backlash from his party and MPs? While most SYRIZA lawmakers and members have just about stomached a switch from decrying the bailout to now implementing it, the switch from lambasting authorities for their unfair treatment of refugees and migrants to being the ones unable to meet their needs or even curtailing their freedom may be too much. In this sense, the migration crisis may prove a greater challenge than the economic one for Tsipras in the months ahead.