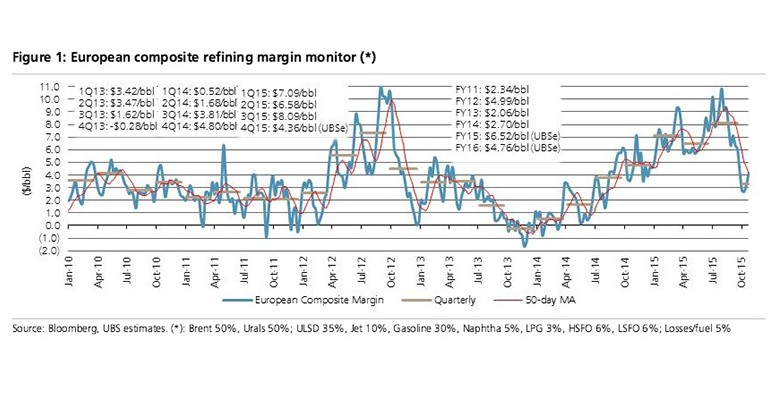 UBS | Several oil companies shared their views on refining margins over the 3Q reporting season and CMDs over the past month and we find these often contrast with investors’ views as companies were generally reasonably positive about the outlook for margins for the next few months. Several companies (BP, Neste) highlighted that the global refining supply/demand outlook is fairly balanced for 2016, which is in line with our view. Following an unprecedented number of delays and cancellations because of the lower oil price, we see only 1.05Mbpd of net new capacity in 2016 vs. oil demand growth of 1.1Mbpd globally and the market looks equally balanced in 2017. Other companies (Repsol, Saras) pointed out that actual spare capacity in Europe is lower than reported. European refineries’ utilisation rate has indeed only averaged 85% YTD (vs. 92% for US refineries, Figure 4) despite the high margins, suggesting a tighter market than commonly perceived.

One of the major concerns currently is the potential oversupply of middle distillates as inventories reach high levels, especially in Europe. We agree that this is partly caused by higher supply as new refineries in the Middle East ramp up but this is also caused by a build – up of inventories in ARA because of low water levels on the Rhine which prevents products moving inland (highlighted by Switzerland’s emergency stocks release last week). This may last for some time but inventories will be able to clear at some point, releasing some of the pressure. Refiners find the middle distillates market actually fairly balanced (Valero, Marathon) and e xpect a recovery in margins later this year as demand picks up seasonally (Neste).

European refining margins have weakened faster than we expected and there is some downside risk to our 4Q European margin forecast at this stage: our composite margin is running at $3.3/bbl QTD vs. UBSe $4.36/bbl. Margins have picked up in the past week though (to ~$4.2/bbl) and we continue to expect a solid 2016. We expect to see a more pronounced seasonality than usual with high margins in 2Q and 3Q because of gasoline.