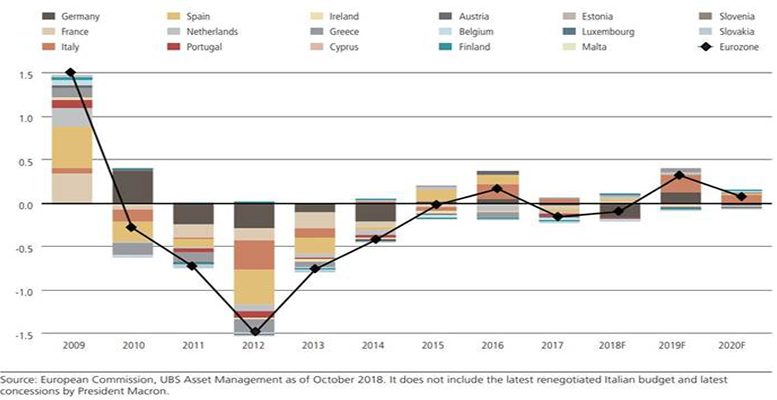 Evan Brown (UBS AM) | …But as the importance of fiscal policy increases for economic stabilization, uncertainty about its effects also increases.

In the short term, the gravitational pull towards greater fiscal stimulus is healthy for risky assets.

The concessions of the French president, Emmanuel Macron, to the yellow vests; the change of the Italian populists, and some modest easing of Germany are helping to give Europe its biggest fiscal impulse since the financial crisis (see graph). Although it still only adds a few tenths to growth, it is helping the European economy to cope with the setbacks generated by external agents. Specifically, Germany has a lot of room to do more with 10-year bond yields close to zero and current room for maneuver in the fiscal space.

On the other hand, China’s fiscal easing is becoming necessary to protect itself from setbacks in the area of ​​trade, as well as in the step prior to deleveraging. These steps are crucial to support global growth, which has slowed, but is likely to bottom out in the coming months as a result of these political maneuvers.

In addition, a truly aggressive fiscal expansion could finally reactivate inflation and inflation expectations quickly and non-linearly. The net result of this situation should be a strong increase in bond yields and discount rates applied to risk assets. Investors in multi-assets have generally benefited over the last twenty years from disinflation and from the negative correlation between stocks and bonds. But there are many historical precedents for a positive relationship between bonds and equities, and weak bonds could well drive the weakness of equities. Or at least, the bonds may not serve as a refuge against falling equity as well as they have until recently.

While we expected central banks to remain patient in the face of the broadening of the economic cycle, we were surprised that the Federal Reserve quickly removed interest rate rises from the table. A continued accommodative monetary policy coupled with a more supportive global fiscal policy, especially outside of China, remains a constructive backdrop for short-term risk assets. While the Federal Reserve tries to reheat the economy in order to generate a rapid increase in inflation, we maintain exposure to inflation break-evens. Beyond these aspects, we closely follow the rise of populism and the potential for a much more aggressive fiscal stimulus backed by ideologies such as the Modern Monetary Theory. Regardless of the normative judgments about whether it is a sound economic policy, a fiscal change of this magnitude would not be particularly kind to risk assets. Such an environment would typically favor greater diversification towards real assets, such as precious metals or real estate.