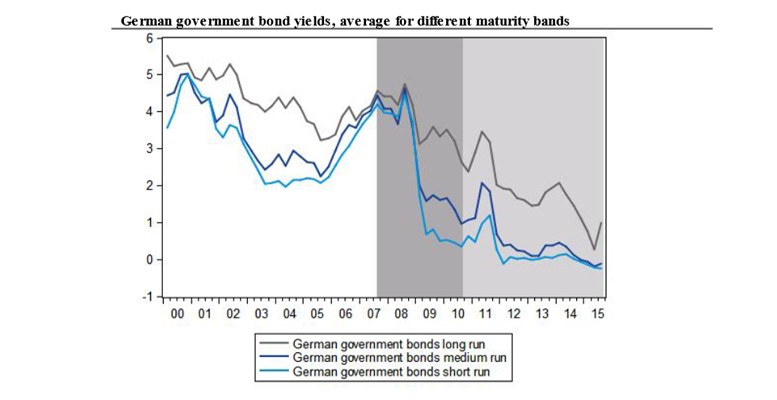 The balanced budget in Germany is largely the result of lower interest payments due to the European debt crisis.

A research from the Halle Institute for Economic Research (IWH), member of the Leibniz Association, shows that the debt crisis resulted in a reduction in German bund rates of about 300 basis points (BP), yielding interest savings of more than EUR 100 billion (or more than 3% of gross domestic product, GDP) during the period 2010 to 2015. A significant part of this reduction is directly attributable to the Greek crisis.

When discussing the costs to the German tax payer of saving Greece, the German Halle Institute has claimed that these benefits should not be overlooked, as they tend to be larger than the expenses, even in a scenario where Greece does not repay any of its debts (it amounts to no more than EUR 90 billion, including the package currently being negotiated).

Halle Institute for Economic Research has pointed out that other countries like the U.S., the Netherlands or France have also benefited with the debt crisis, but the effects are significantly smaller.

Concerning the future, the IWH expects Germany to continue profiting from the current situation. ‘If the situation calmed down suddenly, Germany would no longer be able to issue debt at depressed rates. However, sizeable amounts of medium-and long-term bonds issued in the past years are still far away from maturity,  extending  the period of German profits for some  time to come,’ concluded the authors of the study Geraldine Dany, Reint E. Gropp and Gregor von Schweinitz.