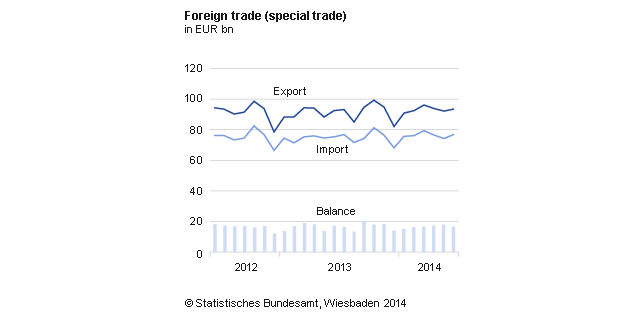 Data from the Federal Statistics Office show that despite international instability in Ukraine, Israel and Iraq, the German domestic demand remained strong and this could have a positive impact for the eurozone’s exporters.  Compared with June 2013, exports to the EU countries increased by 2.6% and imports by 5.0%. Goods to the value of € 34.8 billion (+0.3%) were dispatched to the Euro area countries in June, while the value of the goods received from those countries was € 35.7 billion (+4.0%).

However, concerns of a possible contraction in the 2Q are growing and Russian sanctions’ impact on the largest Europe’s economy could definitely slow down the European recovery. Meanwhile, DAX-30 index has contracted already below the 9000 points mark for the first time in five months.