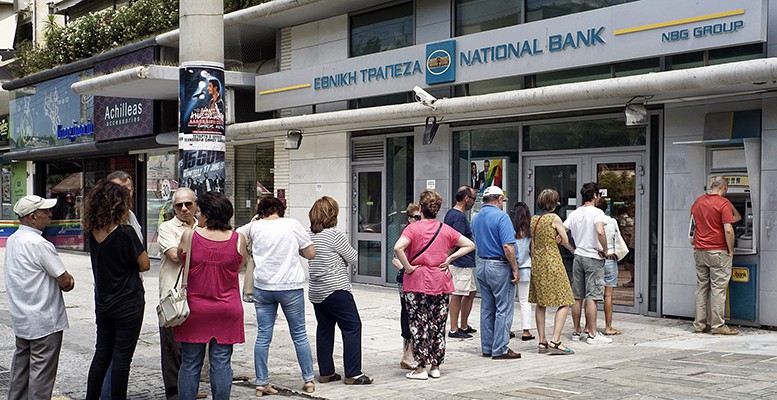 As banks open their doors today, damage inflicted by the deposit run will force the ECB to pump in huge liquidity amounts to prevent a quick cash dry up and extensive disruption.  Yet the real damage will only emerge when gauging the extent to which impaired portfolios have worn away solvency ratios.

Tsipras took a wild gamble by calling for a cheat referendum, as no matter the outcome,he never challenged the firm commitment to stay within the eurozone. No wonder the conditions were set up by its partners. His only winning card was being ready for a Grexit and the ensuing default on Greece’s half a trillion euros liabilities. Delivering such an ultimatum was utterly out of reach, if only because introducing a new currency takes six months at least.  When Schäuble floated the idea of kicking Athens out of the euro, even temporarily, unconditional surrender seemed inevitable.

Creditors narrow-mindedly imposed a salvage plan on Greece to ensure sovereign debt doesn’t fail in the medium term. Even so, they promised to soften its conditions, all too aware that Athens would prove unable to keep pace. But they largely disregarded the fat bill urgently needed for redressing ailing banks. Earmarking €25 billion out of the Fund for privatising disposable public assets seems a damp squib. It might take months, let alone years, to cash in such a war chest. Menwhile, credit institutions in Greece might face extensive bankcruptcies.

Debtors in Greece have a dismal record in facing their commitments. Capital controls have crashed confidence and squeezed economic performance, skyrocketing impaired assets and wreaking havoc on banking balance sheets. The reckoned  €25 billion shortfall grossly underestimates total losses. Bailing-in credits and large deposits might prove unable to shore up the huge gap. Unless extra money is rapidly disbursed, the collapse of the financial system would lead to the complete destitution of the Greek economy and leave Europe facing a much higher bill.

Be the first to comment on "Greek banks open today"