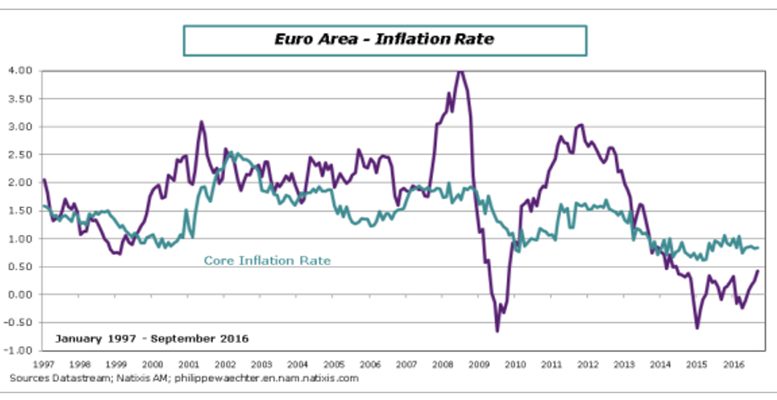 Waechter explained that in a post in August (see here).

The contribution of the energy sub-index is now less negative that it was in previous months. It was at -0.55% in August and is just -0.29% in September. The black line on the graph below clearly shows this increase.

The energy component is clearly linked with the oil price momentum. When we compare the oil price in 2014, 2015 and 2016 we see that 2015 prices were below 2014 leading to a negative contribution from energy. It was the same during the first part of 2016. But since mid-August 2016 price is close to 2015 price. This means that the energy contribution to the inflation rate will rapidly converge to 0%.”

This can be seen when comparing the yearly change in the oil price (blue line below) and the energy contribution to the inflation rate (purple line below). The two series have a consistent patterns. The oil price change converges to zero and the contribution will converge to 0% rapidly.

If the oil price is fixed at 50 and the euro dollar exchange rate at 1.12 then the contribution will rapidly be positive. Therefore the inflation rate will be higher.

In the first months of 2015 the energy contribution will increase rapidly as at the beginning of 2016 the oil price was below USD 30 (see the third graph). If the hypothesis (50, 1.12) is seen all along 2017 then the inflation rate will be close to 1%. Therefore real interest rates will decrease rapidly and be negative or more negative in many countries. This will change investment incentives in many countries and could lead to a stronger recovery than expected.

This momentum on the inflation will be seen in many countries leading to lower real interest rates everywhere. This will be positive for growth as the deflation risk will be lower.