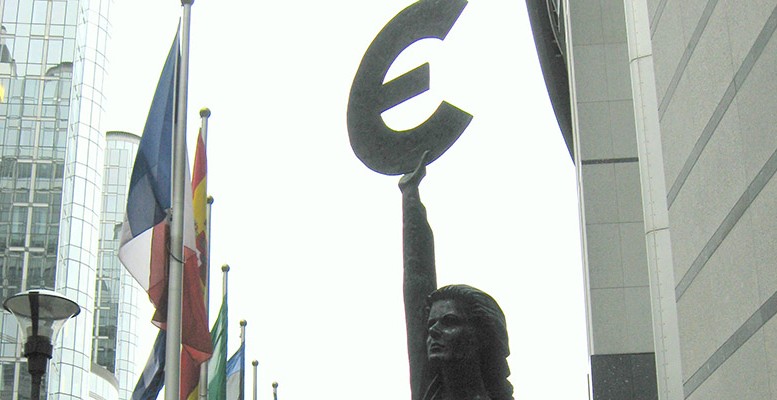 The 2008 financial crisis was not a one-off event. The resources that were available to cope with that crisis would not necessarily be there if there was another crisis. Government debt and GDP ratios are still high, and pension and health costs are escalating across Europe. Structural reforms in countries like France are moving at a snail’s pace. Countries have not benefitted equally from the convenience of having a common currency in the euro. For example, Ireland has benefitted much more than Italy.

Borrowing by non-bank institutions globally is higher now than it was in 2008. Concern is sometimes expressed about the expansion of the less supervised “shadow banking” sector in China. Shadow banking represents 40% of Chinese GDP. Shadow banking is nearly 200% of the eurozone’s GDP.

Forecast economic growth for the world as a whole in 2016—at around 2.9%—is at its lowest level since 2009. Non-performing loans in the banking system remain stubbornly high, so the stimulus being given to the economy by the European Central Bank (ECB) is being soaked up, keeping these afloat, rather than being used in new lending. Money is there, but it is not circulating fast enough.

Meanwhile, Europe’s leaders are thinking of their national electorates instead of the eurozone as a whole. This is because they are each elected and reelected by national electorates, rather than by a common European Union (EU) or eurozone electorate. Political incentives and economic responsibilities are not aligned in Europe. That needs to change.

A roadmap toward a complete Economic and Monetary Union was produced by the presidents of the European Parliament, the European Council, the European Commission, the ECB and the euro group in 2015. It called for a number of reforms to be implemented in three stages, with a view to completion of the final stage by 2025. The first stage is from 2015 to 2017.

Progress on some of the first stage reforms has been made—for example, on a single system for winding up banks. But Slovenia and Belgium have still had to be taken to court to get them to implement what they have agreed. Progress is also being made on a union of EU Capital Markets.

The five presidents proposed, in the first stage, a networking system of European competitiveness and for authorities to promote structural reforms, but little is happening on that. Some question what it would add.

It also proposed an advisory fiscal board. The members of this will be part-time (10 days a year), so it is hard to see this making much difference. If states ignore advice from the European Commission and the Organisation for Economic Co-operation and Development (OECD), why should they pay much attention to this new advisory board?

In accordance with the five presidents’ timetable, the commission has proposed, as part of the first stage, a system of mutual deposit insurance. This is crucial because without it, the link between bank solvency and the solvency of states is not broken.

Some countries are reluctant to agree to this because they fear their banks will find themselves bailing out depositors in banks in less well-managed countries. Banks in individual states are still buying an unhealthily large amount of the bonds of their own countries. It is hard to have mutual deposit insurance of banks across the eurozone as long as that insurance could be used, indirectly, to prop up states that are not managing their finances properly.

The eurozone continues to rely on “naming and shaming,” and on possible fines, to get member states to manage their fiscal policy in accordance with the agreed rules. In other words, it is relying on politics to discipline politics. On the face of it, this is a naive proposition.

It would be much better if the bond markets did that job, through differentiating interest rates between well- and less well-managed countries. But that will not happen if investing in government bonds of eurozone states can be assumed to be risk-free. A bail in system for government bonds would change that. But that is not on the agenda.

In stage two, the five presidents proposed a “macroeconomic stabilization function” for the eurozone. This is, in effect, a fund that could be used to support the budgets of states that are in difficulty and, if properly managed, could be a big confidence giver to the eurozone economy.

But the criteria on which it would work are unclear. Would it be used to cushion against short-term shocks, or to promote long-term reforms? It is also unclear where the money might come from. Some have suggested a financial transactions tax, while others a share of value-added tax (VAT) revenue.

The other missing element in the five presidents’ report is a convincing system for mobilizing European opinion behind proposals where some countries may have to accept short-term sacrifices for the greater good. We are well able to do this within states, and indeed that is what states exist to do. But solidarity is weak at the European level.

The only proposal to enhance the democratic legitimacy, in stage two of the proposed Complete Economic and Monetary Union, is closer involvement of national parliaments. While good work will undoubtedly be done in committee rooms by hardworking politicians, under this proposal, it will be largely anonymous and technical, and addressed to national concerns and national electorates. It will not paint the big picture.

It will not create a sense among the great European public that they have been brought on board, and give them a sense that they have endorsed all the cross border risk and resource sharing that a real complete economic union must involve. That can only happen if there is a regular eurozone presidential election campaign before we move on to stage two and three of the proposed full Economic and Monetary Union.

During such a campaign, rival economic programs for the final phases of an Economic and Monetary Union could be canvassed by rival candidates, and the public could have their say on polling day—in the knowledge that if they do not like the result, they will have the chance of throwing their chosen president out at the subsequent election.

Without such a prior democratic exercise, there will not be enough popular solidarity across borders to sustain a Complete Economic and Monetary Union of the eurozone countries.