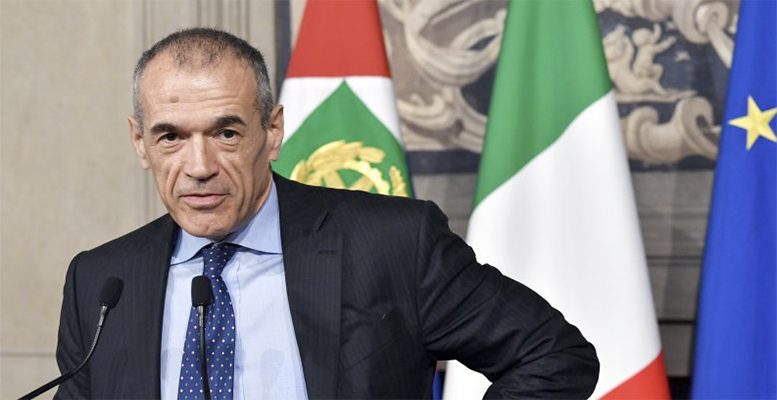 Carlo Cottarelli has been asked to form a government in Italy

Concern about Italy is the order of the day and the situation in that coutry will continue to grab investors’ attention. To such an extent that a photograph of what’s going on there is required, starting with this key question: we are facing a problem of public, not private debt.

The latest data from the Bank for International Settlements (BIS) highlights that lending to the private non-financial sector in Italy totalled 113% of GDP in Q3’17, after trending lower in the last few years. It stood at 127.3% in 2012. Whatsmore, households’ contribution to this 113% of GDP is reduced, representing 41.2% at the end of Q3’17. Figures which are contained if we compare them with the weighting of lending to the private non-financial sector in the EMU, namely 160% of GDP, or the 167.9% of the developed economies as a whole.

So, as is in the minds of investors, we are facing a public debt problem. And the worrying thing is that if the distrust continues to increase, it is capable of bringing the whole of the transalpine economy down with it.

According to the latest figures from the Bank of Italy, public debt stood at €2.302 billion in March, close to around 133% of GDP. The majority of this debt would be channelled via medium and long-term negotiable instruments. For example, the central government’s debt constructed via securities stood at €1.953 billion at end-April and its average life was 6,9 years.

That said, betting on medium and long-term debt or the length of the average life of that debt, although important, take second place in times of tension like we are facing now. At these moments aspects like foreign investors’ share of this debt or Italy’s short-term financing needs are more relevant. As regards the first point, and according to the Bank of Italy, total public debt in the hands of non-residents was €739 billion last February, of which €690 billion were constructed via negotiable securities. In other words, foreign investors hold nearly one third of Italy’s public debt and these are the ones who first express their concern when faced with times of uncertainty.

The other major holder of transalpine debt, along with foreign investors, is the Bank of Italy, with €375.324 million at end-March. A figure which comes from its own portfolio and the one in the name of the Eurosystem. In fact, this amount should rise in April given that in this month the ECB’s public debt purchasing programme added on € 3.971 million, taking the total 341.179 million.

With regard to Italy’s short-term financing needs, the situation is somewhat more confusing as the different calendar for holidays gave rise to an atypical budget deficit of €40.487 million during the month of March. This is a figure which should be compensated for in the coming months, only being in a position to confirm that the months of October and November are usually complicated ones for transalpine finances as they register deficits. So it makes more sense to focus on another question about which we have more reliable information: the calendar of the Italian Treasury’s maturities.

Based on the figures in the latest quarterly report from the Italian Treasury as of March 31, in 2019 Italian maturities would exceed €200 billion euros. And between June and December of the current year there is a further €176.211 million. These figures could have changed slightly since March 31 as a result of issuances of bills of exchange, but they are still a reference very much to be borne in mind. So, basing ourselves on these, it only remains to flag which months would be the most delicate ones for the maturities: June €31.515 million, August €36.514 million and December €36.659 million. For the time being, we should pay close attention today to the Italian 5- and 10-year bond issues, as well as a floating rate 2025 bond.

The concern about Italy is extreme, with a greater probability of default. The reality is that the potential proposal for the next elections in Italy to be a referendum about the euro would make the situation even more unsettled.