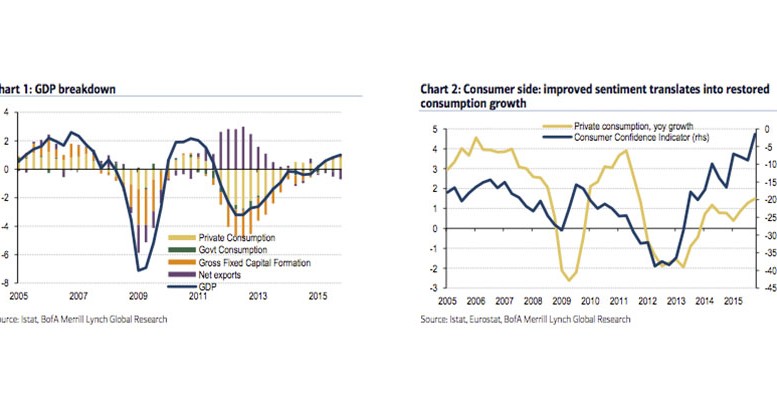 BofA Merrill Lynch | Rome has designed a comprehensive strategy, in which reforming the institutional and economic structures is made politically manageable by loosening fiscal policy. This comes at an external price – more tense relationship with Brussels and potentially Berlin – but at least the brief is clear. It remains a narrow road though, with political and cyclical risks abounding.

It is all about the reforms

Italy is benefiting from a phase of political stability and reform focus. Reform momentum is continuing and some timid impact is starting to materialize, as suggested by the latest labour market developments. This is conditional in our view on a continuation of the government strategy of lowering the tax burden. In our view, fiscal cyclical support is needed to “grease the wheels” of an otherwise potentially unpopular reform drive. Having said that, there are still many pending challenges ahead for the Italian economy, as we have highlighted before.

We remain slightly upbeat and maintain our above-consensus GDP growth forecasts for the next two years. We continue to expect GDP growth at 1.2% yoy this year and at 1.5% yoy in 2017. Main risks to our forecasts stem first from external factors, the lower traction from external demand (both emerging markets and US) and the fading benefit from the Euro depreciation. Also, concerns on the banking sector with a market and supervisory focus on the high level of non-performing loans are in our view the main domestic source of downside risks. Credit usually follows the cycle rather than kick- starts it, but the ongoing timid rebound in GDP growth would face a major headwind if more supply-side credit constraints were to re-appear.

Still, we think that the new ECB package will provide time for a digestion of the problem and help avoid a steep “credit crunch”.

The government has taken some steps to facilitate the absorption of NPL stock in the form of more efficient procedures for write-offs/transfers of impaired assets as well as state guarantees on the securitisation of NPLs (known as GACS). Overall, it remains to be seen whether these measures can be a game changer.

The prime minister faces two acid-tests this year: the municipal elections in the spring and the referendum on the constitutional reform in October. In our view, the main source of political risk comes from the referendum, while the municipal elections will be an important, but not crucial, test. In addition, the complicated relationship between Renzi and the EU Commission will continue to challenge the outcome of Italy’s negotiations with Brussels.