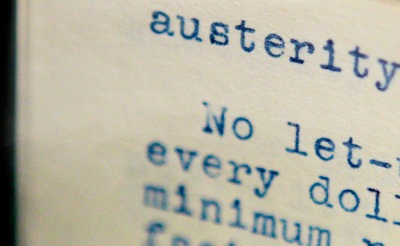 LONDON | J.P. Morgan asset management had some cold words on the news that the UK has entered a double dip recession. Tom Elliott, global strategist at the investment company said that

“For most people, the country has felt like it has been in recession since late 2008, so news of an official double dip will be no surprise.”

In a short note released after the British office for national statistics published Wednesday a preliminary estimate of a -0.2pc contraction in economic activity in the first quarter, Elliott pointed at the adjustment plans as the reason why the UK has been pushed into a recession, if technically speaking.

“The causes? The same as for the eurozone: government austerity. The UK is engaged in the sharpest budget deficit reduction of any European country, paired with a continuing contraction of bank lending to the household sector as the banks repair their balance sheets, and stubbornly high inflation that is eating into real incomes. The result? Rising unemployment, stagnant growth and weak consumer and business demand growth.”

JP Morgan advised equity investors to allocate their capital abroad, in those parts of the world where there is growth as for example in the US and emerging markets. In the UK and Europe, investors should find companies that get most of their earnings from exports to the faster growing economies.

Coincidentally, John Ventre, portfolio manager at Skandia Investment Group explained in a report that during the second half of last year, the firm built up an overweight position in both European equities and European high yield debt. Why? Well, because austerity policies have generated an environment that depresses European companies’ stocks and place them at a cheap price, while increasing profitability levels on sovereign bonds from countries that are not at risk of defaulting.

“My view in October was that European equities in particular were trading at post-Lehman type valuations and that while there were certainly risks, the market was priced for a worst case outcome,” Ventre said. “If bad outcomes are in the price then you have the potential to make a lot of money if it turns out that reality is less bad than expectations.

“While we had to be patient, the payoff arrived in the first quarter of this year as the European Central Bank’s liquidity programme shifted the risks in Europe from a potential financial crisis to a possible political crisis.”

At Skandia, analysts believe that these political risks are rearing their head with Nicolas Sarkozy struggling to win re-election, the Dutch government in transition, and German Chancellor Angela Merkel facing a tough fight later in the year.

“This is giving investors another bite at the cherry.”

Be the first to comment on "JP Morgan blames UK’s recession on austerity, but Skandia sees cheap stocks"