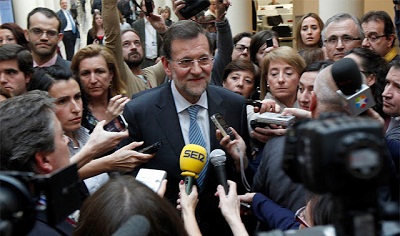 I Want To Get Back With Him MADRID | An Spanish offensive seems to have been deployed in all fronts. Spain's King Juan Carlos in Brazil called on the European Union to advance its integration because the problem, he said, rather than economic, is political. Meanwhile, president Mariano Rajoy introduced in a Senate session what the Spanish position will be in the next European summit: Europe needs a horizon, make clear that the euro is not in question and help countries in trouble. In his opinion, it is necessary to go towards a greater fiscal and banking integration, under a European supervisor, with a pan-European fund of bank deposit guaranteed. And Eurobonds.

“Spain is now leading the reform effort in the European Union as a whole, and everybody is beginning to recognise that effort.”

Against the 'an State soon to be bailed out' stigma, some Spanish bankers came today to the fore to criticise the way Spain's entities are now the focus of tensions. Amado Franco, president of Ibercaja, which is one of the big sized Spanish savings banks in a merger process, explained to the listeners of the SER radio station that

“the Spanish financial institutions, after the lates

I Want To Get Back With Him

t two reforms, leaving aside the intervened institutions, undoubtedly, are much healthier than the German financial system, the French or the Italian, this is quite clear. What happens is that we are in a maelstrom of vanishing trust.”

In his view, the problem comes from not having separated the good from the bad banks before the financial reforms.

Most Spanish bankers remarked that Spain has taken 95% of its financial system through the stress tests, while Germany, Italy and France have tested theirs only up to a 50%, with flagrant cases, like the withdrawal from the probe of Germany's Helaba, which was believed it would surely fail the stress test.

Agency Moody's Investors Service added today pressure on Berlin, where the government maintain the fiercest opposition to proposals recently made in Madrid but that are shared with the new French president, too, as the use Eurobonds. Moody's took various negative rating actions on some German banks and their subsidiaries. As a result, the long-term debt and deposit ratings for six groups and one German subsidiary of a foreign group have declined by one notch. Moody's also downgraded the long-term debt and deposit ratings for several subsidiaries, by up to three notches.

According to the agency, its rating actions were driven by the increased risk of further shocks emanating from the euro area debt crisis, in combination with the banks' limited loss-absorption capacity.