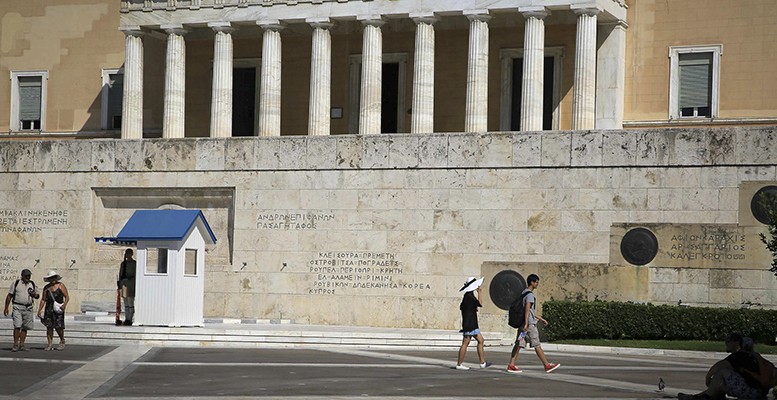 One of the main reasons that Alexis Tsipras wanted to hold elections as soon as possible after agreeing the third bailout in August was that it gave him the best chance of obtaining a fresh mandate before the impact of the latest set of fiscal measures was felt by the average voter.

In many ways it was a smart political manoeuvre, apart from one problem: What happens when people realise what’s hit them and they start to blame the re-elected prime minister for their misfortune?

The average Greek has suffered deeply in financial terms during the crisis. Only in the last few weeks a raft of data has highlighted Greeks economic plight. According to Credit Suisse’s annual Wealth Report, average wealth in Greece has fallen by 28.7 percent since 2008, hastened by plummeting property prices and a collapsing stock market. During the same period, the European average rose by 6.7 percent.

A study by the European Central Bank shows that Greeks lost on average 16,909 euros per person in the four years from 2009 to 2013. Among eurozone countries, only the Irish experienced a bigger decline in personal wealth during the same period.

Eurostat data published this month showed that the percentage of Greece’s population at risk of poverty or social exclusion in 2014 reached a record high of 36 percent, or 3.88 million people. The European Union average is 24.4 percent. Greece has experienced the biggest rise in the EU since 2008, when the ratio was 28.1 percent.

The Organisation for Economic Cooperation and Development (OECD) found that household disposable income fell by 27.5 percent per capita in Greece from 2007 to the first quarter of 2015, bucking the trend in the world’s leading industrialised nations, where the figure went up by 8.13 percent. Greek household disposable income is now 72.5 percent of what it was in early 2007. Also, the household gross savings rate has plunged from 3.2 percent in early 2007 to -6.8 percent this year.

You could continue to go through this roll call of “read ’em and weep” statistics for some time. However, it would not necessarily reveal perhaps the most interesting aspect of all, which is that, despite this striking worsening of their situation, Greeks have shown an exceptional level of resilience. When all these crashing indexes are tallied up, it is remarkable that the social unrest and political turmoil has not been greater during the last few years.

This makes it all the more puzzling that Tsipras actively campaigned to take charge amid this disarray and then follow a strategy that made things even worse. He sued for early elections last December and followed this up by going to the brink with the eurozone over bailout talks. In the intervening period, more than 40 billion euros in deposits were withdrawn from Greek banks, state cash reserves were used up, government arrears climbed to almost 6 billion euros, capital controls choked numerous small- and medium-sized businesses, investors were scared off and a weak recovery was transformed into an estimated recession of at least 1.3 percent of GDP for the year.

Tsipras’s own failings have compounded the catastrophic decisions of his predecessors to leave a society that seems perpetually balanced on the edge. This is how the SYRIZA leader has ended up leading a country where there are 3.6 million people working to help support 1.2 million unemployed and 2.6 million pensioners; where repeated spending cuts and tax hikes have only managed to push the public debt up to 178.6 percent of GDP, with the International Monetary Fund expecting it to be above 180 percent by 2020; and in which the tax owed by businesses and individuals has topped 80 billion euros and another 14.5 billion is owed to social security funds.

Everywhere you look the limits of the system’s tolerance are being tested. Tsipras’s task in trying to hold all this together and prevent a total collapse is huge. His most testing period could be in the next few months, when the financial obligations that he wanted to beat to the punch start hitting home.

It is estimated that the changes to VAT rates, which were voted through in July, will lead to the average Greek family paying an extra 650 euros a year. The unpopular ENFIA property tax will remain unchanged for this year despite the government’s earlier promises to the contrary, meaning that a minimum of 2.6 billion euros (or 525 euros per owner) will have to be raised by early next year. On top of that, there are 6.4 billion euros of new fiscal measures included in the 2016 draft budget.

Greece is also in discussion with its lenders about tightening the restrictions on home foreclosures. The restrictions in place so far have kept home repossessions to a minimum, which is one of the reasons that the social impact of the crisis is not always immediately visible in Greece. However, if the creditors get their way only those living just above the poverty line (14,000 euros annual income for a couple) and with a property valued at less than 120,000 euros will enjoy protection. If this is implemented, it could have a dramatic effect on Greeks’ tolerance levels.

Perhaps, though, the most arduous task will be presenting a new pension reform plan later this year. Greek pensions have been cut numerous times since the first bailout began in 2010 but they remain the financial lifeblood of many Greek families. Over the last couple of years, an annual survey carried out by the Small Enterprises’ Institute of the Hellenic Confederation of Professionals, Craftsmen & Merchants (IME-GSEVEE) has indicated that pensions are the main source of income in almost half of Greek families. The average basic pension currently stands at 714 euros per month and the average supplementary pension at 169 euros.

The details of the pension reform plan will not be known for a few weeks yet, but all indications point to anyone retiring in the coming years only being able to claim a basic state pension of less than 400 euros per month, while those taking home a retirement pay of more than 1,000 euros at the moment can expect a new round of cuts as well. The economic impact and extra pressure that this will cause on millions of Greek families is painfully obvious.

When the government’s plans to slash spending on pensions, which runs to more than 28 billion euros per year (or almost 16 percent of GDP), is unveiled, Tsipras may find himself wishing that someone else was prime minister. It will be the latest blow to a society that has staggered through a flurry of punches in recent years and whose stamina will be tested in the coming months. What Tsipras has to ask himself is if that endurance will last or whether breaking point will be reached on his watch.