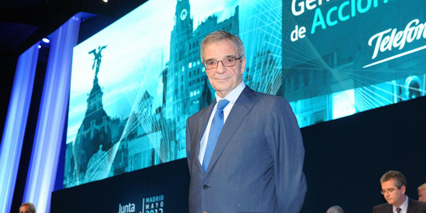 Fernando Barciela | At first sight, Telefonica’s third quarter and nine months to September results couldn’t be better. Between January and September, the company posted a 12% rise in consolidated revenues to 35.4 billion euros. Net income increased by a spectacular 69.6% to 46 billion euros in the same period.

Total mobile accesses rose 12% to 251.4 million, on the back of mobile contracts (+17%), while fibre accesses reached 5.8 million (four times more than September 2014). There was a record net addition of 385,000 accesses, mostly from Telefonica Spain and Brasil. Pay television also did well with accesses reaching 8.2 million, almost doubling year-on-year. In Spain, Telefonica had 2.5 million TV customers in September, up 275,000 quarter-on-quarter and 1.6 million more than a year earlier.
Another piece of good news is that revenues in Spain grew for the first time in seven years between June and September, rising 0.2%. This means the company returned to year-on-year revenue growth after seven years of a great business transformation process.
Chairman Cesar Alierta said the savings obtained from integration synergies, mainly in Germany, are already starting to produce tangible results.  “Third quarter results reflected further acceleration in organic growth figures derived from increased commercial momentum, mainly in high-value products and services,” Alierta explained. And something very important: the company will maintain its dividend policy for 2015 and 2016.
Nevertheless, investors didn’t appear satisfied with the figures. Shares in Telefonica fell 1.8 percent Friday morning and 1.5 percent in the afternoon, underperforming the telecoms sector and partly erasing the 10 percent gains made over the last month.
Why did this happen? Mainly because Telefonica failed to convince investors a rebound is sustainable, according to analysts. A closer look at the figures show some very serious problems remain the same or have worsened. For instance, even though revenues climbed 1% in the third quarter, profit fell 1.9% to 884 million euros ($961 million), missing analysts’ forecasts.
And in Spain, almost all the news is bad. OIBDA (operating income before depreciation and amortization) slipped 2.9%, compared with a drop of 1.9% in the previous quarter, overshadowing Telefonica’s “narrow return” to domestic sales growth. Retail fixed telephony accesses in Spain fell by 5.0% to 10.06 million and total mobile accesses fell 3% to 17.3 million year-on-year. On the other hand, the company posted 1%year-on-year growth in retail fixed broadband accesses to 5.9 million. The company’s fibre customers continued to grow with net additions of 230,000 customers in the third quarter alone to 2.0 million.
Things in Latam, where Telefonica has had to deal with the problems arising from the fact the region’s major currencies declined against the euro, show no signs of improvement. The region posted a 2.1% fall, with Colombia as the worst-performing market: OIBDA dropped 30.5% there. And Brazil, Telefonica’s second-largest market, continues in recession. On Wednesday, the Brazilian unit reported a 16% decline in net income – much larger than expected – due to weak sales growth and rising debt-servicing expenses. Operating profit fell 5.7%.
To make the outlook worse, in Germany Telefonica Deutschland reported a third-quarter net loss of 134 million euros, wider than the 15 million last year. The operating loss was even wider: 124 million euros compared with only 5 million a year ago. All this despite a 63% rise in revenues to 1.979 billion euros. So many things will have to change before investors are once again lured by the stock.