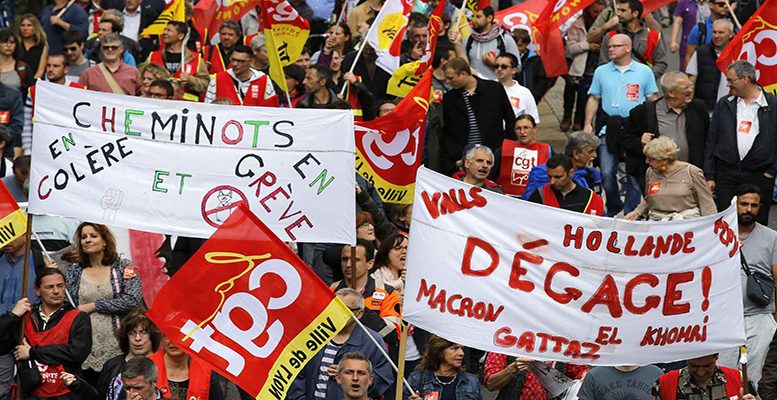 F. Barciela / Fran G. Ljubetic | No to reforms. Despite having an unemployment rate of 10%, the French people feel very comfortable in their heavily subsidised State. France continues to atonish most of the world and Europe as its citizens staunchly reject any kind of reform to update working rights and conditions which, where they exist, are hard.

The labour environment is so tough that the other day the French Labour Court obliged Société Générale to pay its former broker Jerome Kerviel 511,000 euros in compensation money. Their ex-employee was on the point of bringing the bank down after losing nearly 5.5 billion euros. But the Court said he had been “wrongfully dismissed.” This sort of thing would be unthinkable in any other country. Not in France.

Investment in new industrial plants has almost disappeared because the labour laws are so harsh. The big companies, both the French ones and the multinationals, consider that the environment is so restrictive that they do not feel able to organise production in the country in order to be able to compete favourably abroad.

A few years ago when Peugeot announced the closure of a car plant in the country, the former Industry Minister Arnaud Montebourg suggested they close their plant in Spain. Peugot’s reply: “No. In Spain, our plants are much more agile, flexible and productive.” They closed the French plant and extended operations in Villaverde Madrid. And the last labour reform had still not been approved.

There was also the famous clash between Montebourg and Maurice Taylor, CEO of Titan, a US tyre company. The minister had written them a letter inviting them to buy the Goodyear plant in Amiens, which was threatened with closure. Taylor replied to Montebourg in a letter which said the following: ” the “so-called” French “workers only work three hours a day.” “I have visited that factory. The workers have high salaries but only work for three hours. They have an hour for lunch and for having a rest, they talk for another three hours and work for another three. I told the unions this and they told me that ‘this is France.'”

So the situation has got so out of control that the current socialist government of Manuel Valls, under the presidency of François Hollande, which before the elections promised more spending and social benefits, has had to design a labour reform very much like the Spanish one, that of Mariano Rajoy, of course. No wonder. France is growing at an annual rate of 1.4%, even below the eurozone average (1.7%), which now is… nothing new. The country has been growing 0%-1% for almost a decade.

The worst thing is that this has not just raised the unemployment rate in France to 10%. Youth unemployment is around 25%. And while Spain, with its reform, has eliminated nearly 700,000 jobless people from its unemployment figures, in France this has just been 130,000 over the same period. All this implies a huge risk for the country’s future. It is becoming increasingly more difficult for France to maintainn its pre-eminence in business, industry and technology. Without new investments, its productive fabric will become obsolete. In this year’s Global Competitiveness Index France is in 22nd place (Germany in 4th place).

Given that these realities are not very difficult to understand, it is to be hoped that the French will approve the socialists’ labour reform, even if they turn up their nose and consider it some kind of necessary “evil.” Particularly the younger people (more of whom are out of work and who have the most to lose with the lack of opportunities).

Just the opposite. As we know, there has recently been one of the greatest waves of strikes in France in the last 15-20 years, with huge demonstrations, the width and breadth of several cities across the country, generalised strikes in the transport system and even some scenes of urban warfare.

Some could argue that the reactions are typical of unions who have ruined previous attempts, as for example during the presidency of Nicolas Sarkozy. But that’s not the case. The French DON’T WANT REFORM. A survey carried out by Ifop showed that 46% of French people want the reform, approved in the National Assembly, to be completely overturned via a special procedure. Then 40% want it to be tempered and only 11% agree with it.

And it’s not that the reform is revolutionary. Just like in Spain, it is limited to handing over negotiating to the company, facilitating lay-offs if a company is in difficulties, lowering the cost of this process or allowing employees to work longer hours (if they vote in favour). As a matter of fact, even the bosses are now against the Reform, which they refer to as being watered-down and so “it’s not going to be of any use.”

It goes without saying that the new law has caused a very serious breach in the French socialist party, which has forced Valls to approve it via a special procedure. A large group of MPs said they would vote No and accused the law of being “business friendly,” a mortal sin in France.

Faced with such an almost monstrous show of short-sightedness from a country, which has always been much praised, you have to ask yourself what exercise of imagination are the French embarked on. Is it that they are prepared to commit suicide along with their country? Have they not heard about globalisation, from which there is no escape?

Perhaps the only answer is that, from an egotistical point of view, many of them are not interested in the fact that their priviliged labour system is the cause of the country’s stagnation. Why? Because they live really well, protected by a generous social state if ever there was one, whether they are working or not. Why are they going to give up their working conditions if, even when they are out of work, their country continues to be ‘La Douce France.’

Here are some very illuminating figures. For example, French unemployment benefits are amongst the highest in Europe.  The unemployed get 70% of their salary (which on average is about 2,000 euros), which lasts for two years (if they are under 50) or three (if they are over 50). And if they have right to unemployment benefit (because they have not worked or have used up the benefit) they have access to the RSA ((Revenu de Solidarité Active). This gives them 514 euros (a couple with two children) or 1,079 euros (with four children) per month.

In addition there are the benefits for children. In France, parents have the right to a monthly benefit payment of 129 euros if they have two children, or 461 euros if they have four. And half of the expenses for their care – domestic workers, nurseries and even computer assistance – can be deducted from their income tax return up to a maximum amount of 12,000 euros. And it goes without saying that there are more comments to be made here. Has France got t the money to pay for all this? It doesn’t look like it. But the French shrug their shoulders, and with this Parisian expression, very much part of them, it’s as if they are saying ‘I couldn’t care less.’