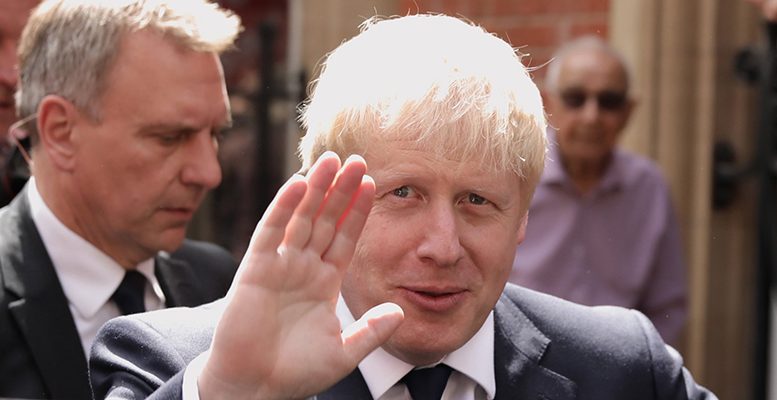 Shaun Riordan | Boris Johnson will fulfill his life-long ambition of becoming Prime Minister this afternoon. The pro-Europeans within his own Conservative Party have postponed their rebellion until after the summer. Mrs May will therefore be able to recommend Johnson to the Queen as the political leader best placed to secure a majority in the House of Commons, and therefore best able to form a new Government. But that majority is wafer thin. Even with the support of the N Ireland Unionists, his overall majority is only three. That is likely to be reduced to two following an upcoming by-election. Up to twenty Conservative MPs have indicated they could be ready to bring down the Government to avoid a no deal Brexit.

Johnson has promised to deliver Brexit by 31 October “do or die”. If that means a no deal Brexit, then so be it. But that was to win the campaign to become leader of the Conservative Party, and to reassure the party faithful (average age over 60) that he would best hold off the challenge from Nigel Farage´s Brexit Party. But Johnson´s real aims as he entered Downing Street are to be a successful Prime Minister and avoid elections that could let in a Labour Government. A no deal Brexit would threaten both. Whatever his public antics, Johnson knows that a no deal Brexit would have a catastrophic impact on the British economy, and that he would be held responsible for it. He has not fought so hard to become Prime Minister just to go down in history as the worst ever.

Suggestions that Johnson was contemplating leaving the EU without an agreement would immediately endanger his government. Sufficient Conservative MPs have made clear that they would then be willing to join the opposition in a vote of no-confidence against the government, whatever the cost to their political careers. The most likely outcome would be an election which Johnson would find difficult to win. While he is beloved (for now) by the Conservative rank and file, he is far less popular with the population as a whole. Because of the British “first by the post” system, the Brexit Party is unlikely to win many, if any, seats in Parliament. But by splitting the Conservative vote, it could let in sufficient Liberal and Labour MPs to form a comfortable parliamentary majority.

The prospect of Labour leader Jeremy Corbyn as Prime Minister appals many Conservative rebels and Liberals almost as much as a no deal Brexit. Indeed, many Labour MPs are not keen on the idea either. So there is another plan being discussed in Westminster: the creation of a national government. In this scenario, pro-European Conservative and Labour MPs would unite behind an uncontroversial figure to form a government for the purpose of holding another referendum. Such a national government would enjoy the support also of the Liberals and Scottish Nationalists. Such a coalition could be formed either following a no-confidence vote, obviating the need for an election, or following an election. The name being banded around the corridors of Westminster to lead such a national government is Keir Starmer, the respected Labour Brexit spokesman.

So if Boris Johnson does not want his premiership to be either disastrous or short he needs to secure an agreement on Brexit with the rest of the EU. This will not be easy. The EU has made clear that it is unwilling to reopen the Withdrawal Agreement, although there may be scope for more constructive language in the accompanying Political Declaration. Hard line Brexiteers in the UK are already mumbling darkly about betrayal. They fear that Johnson will fob them off with cosmetic changes to the May deal, and leave them with nowhere to go without risking Brexit itself in new elections or a new referendum. They may be right. A Boris Johnson premiership is all about Boris, and his personal political ambitions. The niceties of Brexit can be sacrificed if they clash with those ambitions.