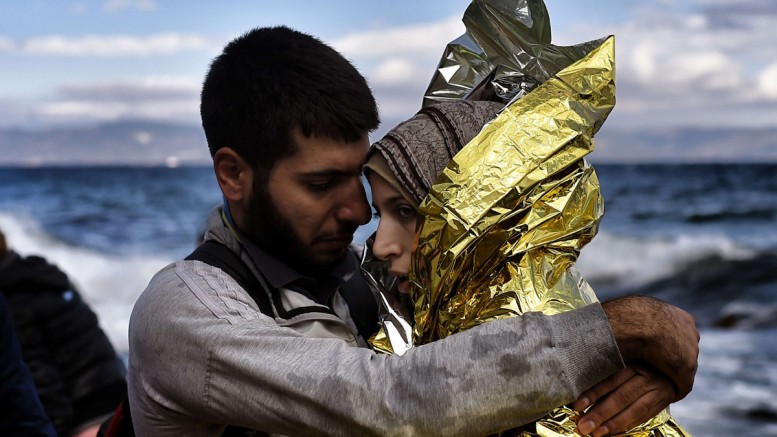 Nick Malkoutzis via Macropolis | As symbols go, the imaginary pig’s head in William Golding’s Lord of the Flies requires little explanation. Its meaning is summed up in one line of the unnerving classic. “Fancy thinking the beast was something you could hunt and kill!” says the fly-infested head. “You knew, didn’t you? I’m part of you?”
The pig’s head represents everything that is dark and nasty about the schoolchildren stranded on the fictional island, everything that is repugnant about our society: What often lurks beneath the surface but occasionally spews forth with malice.

If we are looking for symbols to suggest there could be a possible unleashing of these negative forces in Greece, then a pig’s head seems as apt as any. Last Tuesday night, racists hung a pig’s head and cross on the fence around a new transit centre for refugees that has been created in the Schisto area of Athens.

Similar incidents have taken place in other European countries but this type of symbolism has been largely alien to Greece until now. Prime Minister Alexis Tsipras described it as a Ku Klux Klan-type action, intentionally or unintentionally stressing its foreignness. However, perhaps it would be best to accept that Greece will not remain immune to the extremism that has emerged in other parts of Europe as a result of the influx of thousands of people from Syria, Iraq and Afghanistan.

Until now, Greek society has largely been tolerant of the beleaguered arrivals on its shores, roughly half of whom are women and children. There are several reasons for this. One of the key drivers of this compassion is the underlying psychological connection. It is less than 100 years ago that Greeks from Asia Minor packed onto boats crossing the Aegean to escape death and destruction. Tens of thousands were killed in the war with the Turks, while even more were forced to flee their homes.

The effect this kindredness of spirit has in shaping public opinion in Greece regarding today’s refugees cannot be underestimated. One only has to look at the stance taken by the northern Lesvos grandmothers Militsa Kamvisi and Maritsa Mavrapidi, who in their 80s became internationally recognised when they took a baby refugee into their arms in order to allow its mother some time to rest. “Our mothers came here as refugees from Turkey, just across the way, and they were just girls at the time. They came without clothes, with nothing,” Mavrapidi told Kathimerini recently, underlining the significance of collective memory in dealing with such traumatic situations. “That’s why we feel sorry for the migrants.”

However, another reason that Greek society has been more welcoming to the refugees than others in Europe is that Greece has so far been a transit country. It may have received close to 900,000 arrivals last year, and more than 100,000 already this year, but none of these people want to stay in Greece. They understand that they will struggle to carve out a future for themselves in a country with high unemployment and few resources. For them, security is to be found further north in Europe. I recently spoke to someone working as a translator for an NGO on one of the Greek islands. At the height of the crisis last year, this person spoke to as many as 100 refugees a day. I asked him whether he ever fielded questions from the arrivals about the prospect of remaining in Greece. His answer was emphatic: “Not a single one.”

It is much more difficult to become agitated with a flow of people than a group that lingers. Being a transit country also poses less complicated social questions. Unlike Germany, Sweden and others, Greece does not have to consider how to provide housing, welfare, jobs and education for the people arriving on its doorstep. While dealing with the humanitarian aspects, logistics and security concerns of the refugee influx is no mean feat, it does not create the same social flashpoints as the question of how to induct thousands of new arrivals into your society.

However, the nature of the refugee crisis in Greece appears to be changing dramatically now. An average of around 2,000 people a day have arrived by sea since the start of the year but the tightening of border controls by the countries to the north of Greece means that just a few hundred (at the most) are leaving on a daily basis. This means thousands are being left behind and Greek resources are being stretched to the limit.

It also means migrants remaining in the country for longer, which necessitates the creation of hot spots and transit centres. These have become magnets for expressions of discontent from locals on Kos, as well as in Athens and Thessaloniki. In all these cases, the protests have been spurred on by politicians. On Kos, the mayor has taken a hardline stance compared to his counterparts on other islands, while neo-Nazi Golden Dawn has also sensed an opportunity to stir things up.

Until recently, the impact of the refugee crisis was largely felt on Greece’s fringes, its Aegean islands and northern border. But it has now started to move to urban areas, where the potential for political and social conflict is much larger, especially if the media and opposition parties choose to address the issue in shrill, maximalist terms.

An opinion poll by research centre Dianeosis published on February 28 suggests that Greek society is still showing substantial understanding. It indicates that only 19 percent have a negative view of the island hot spots, while 66 percent believe that Greece should not close its borders to keep out refugees (even if this were possible on its sea frontier with Turkey). The concern, though, is that as the nature of the challenge changes swiftly, so public opinion could sour and the beast could rise from within.