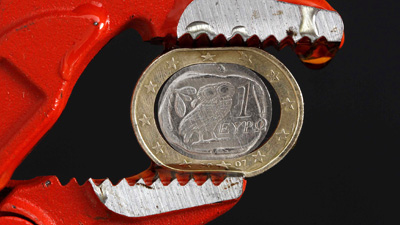 Professor of Economics at Columbia University Martin Uribe strongly believes that the Eurozone needs structural changes to tackle the crisis, especially in fiscal matters. For this expert in macroeconomic analysis, who has worked for many universities and institutions including the European Central Bank, the lack of tax policy at a European level is condemning the least developed countries to beg for aid. Uribe talked to The Corner summer interviews’ series from his office in New York. This is the first part of the interview and we’ll bring you the rest on Monday. – You say the rescue mechanisms being put in place in Europe are mere patches. Why? Because they are partial solutions to a problem: the Eurozone has two types of members, those who are highly developed, such as Germany, the Netherlands and France, and a group of countries still in the process of emerging, like all peripheral Europe. These two groups have very different economic cycles. The first, much softer, the second, broader, more volatile. A single monetary policy for all is not recommended.

– What would be the solution in your opinion? If this formula of a Eurozone will continue in the future, it needs a more flexible fiscal regime. Basically, there is no tax policy at European level as in the U.S. at the federal level. The bailout fund means that every time emerging countries of the Eurozone are in trouble they have to beg for help. Why in the U.S. we never see Alabama asking New York for a bailout? Because the US have a fiscal mechanism that automatically assists states in trouble, with unemployment insurance at the federal level.

– What do you make of the ECB’s behavior? I think their policy has been primarily oriented to help the central European countries, mainly Germany and France. Throughout this crisis, the ECB has maintained a monetary policy that has resulted in very low inflation in Europe, while all the peripheral countries would need higher inflation, between 5 and 6 percent annually for about 4-5 years. This could reduce their real labor costs and their economies would gain momentum again. However, the ECB is taking care of other needs.

– Do you think this imbalance will continue? Yes, if there are no fundamental changes, the problems will continue in the long run. Whenever there is a crisis we will have the same problems we are seeing today. There are two completely different solutions: one is that peripheral countries return to their own currencies. The other is a structural change and the creation of a tax authority at European level with a counter-cyclical mechanisms as have the United States. As I said before, when Alabama goes into crisis nobody in Illinois believes they are giving them gifts because there is an automatic support mechanism. An unemployment insurance financed by the European level coming from all countries, a system to help the needy such as food stamps and perhaps most importantly a progressive tax system will be necessary.

– What is the greatest obstacle to putting this solution in place? The European Commission. It has had a highly procyclical attitude over the last 10-15 years. This means that during boom times it has allowed a wide fiscal latitude of its members: it was very permissive in fiscal deficits. But now that these countries are suffering from a huge contraction, the EC is forcing them to comply with a huge fiscal austerity. That’s totally against the most basic economic principles.

Be the first to comment on "“Without a fiscal authority, Europe will always be a poorly designed system”"