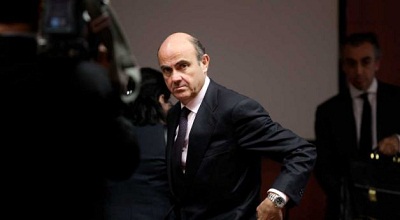 “We have a plan to combine fiscal consolidation with structural reforms in order to jumpstart growth in the country and help stabilize the euro area.”

This was the core message of the Spanish minister of Economy and Competiveness Luis de Guindos’ speech on Friday at the Brookings Institution, a center-left Washington-based think tank.

In his first official trip to the US, De Guindos also held a meeting with the most powerful monetary policy setter, chairman of Federal Reserve Ben Bernanke. Mr Bernanke had previously expressed his concern about the financial tensions in the Eurozone. He reckoned the blitz of ECB money has been positive in Europe. However he still considers there are deep problems, not only fiscal but concerning slow growth and competitiveness issues.

America and Europe’s central banks have had different approaches to the crisis. While the FED has bought $2.3 trillion in long-term securities to boost economic growth since 2008, the ECB is relying on banks to pass on the unlimited funds it is providing, now also with 3-year loans.

Mr De Guindos’ goal is to spur US central bank and investor’s confidence by thoroughly explaining the last financial and labor reforms the Popular Party has put in place in Spain. Although the Spanish economy faces 23 percent unemployment, negative economic growth, and a credit crunch in the banking industry, the country’s rates have fallen sharply in the last three months. Madrid pays less to borrow money. And

“that means they can get its financial house in order without as much pain”, as explains CNN Fareed Zakaria in his blog.