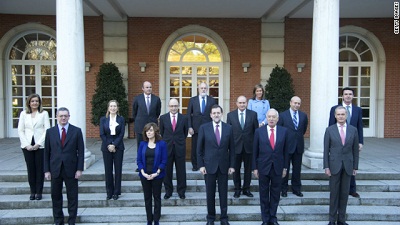 MADRID | Spanish Finance minister Luis de Guindos bears the unpleasant task of playing the wet blanket, being realistic, not promising anything but selling a future. His role is that of the victorious Caesars’ companion, who had to whisper in their ears: “remember you are mortal”. In the government and in front of the citizens, he is the one who spoils the fun. For that he needs a great deal of credibility, not an easy thing to get nowadays. Everybody is aware of how bad things are and how they can get worse. The best thing this year is that the following one might turn worse.

That pessimistic, fatalistic feeling is part of the problem. As long as people’s mood is down, we will never overcome the crisis. The minister and particularly his boss need to boost confidence, tell the truth and show that they are in charge. The message of those who have assumed the responsibility of governing is crucial, part of the solution. They cannot blame others but try to articulate solutions and alternatives. Moreover, the increasing severity of the problem requires that other political parties share the strategy, because they can influence the rest of the voters and generate expectations for them.

In autumn 1977, Adolfo president Suárez called politicians to agree on the so-called ‘Moncloa Pacts’. Today something similar would be a good idea. There must consensus to tackle (more or lesss) financial problems. But when dealing with major issues such as public accounts and or pay for previous mistakes, nobody agrees.

De Guindos has to spend less than last year, but the figures are elusive because almost all are variable. First of all, income was severely hit by the recession. What is sure is that numbers will be smaller, even with tax increases on income tax and some consumption special taxes. More taxes to collect less money. And consequently to spend much less.

The minister speaks about a “fair tax” which is confusing, a way of hiding an inconvenient truth. This arouses suspicion: he should be clearer and more exigent about savings and cuts. Those against cuts should try to balance the books themselves. It is certainly bold to criticise others from the outside while watching them work. Getting down to the bullring requires courage.

This is no time for hot air and empty rhetoric. Talking about fair taxes is a way to escape the truth: taxes are taxes, coercive, irritant as they may be, rarely equitable although progressive, pervasive and unavoidable. No tax is good and fair in itself, they are always a constraint. So let’s talk about how useful they are instead, how necessary. The adjustments are needed because we spent more than we could. This is the case of Spain, as it was Greece’s. The government has made tougher, more inevitable decisions than the previous one,  but has still a long way to go. It should give less soft or rhetorical explanations.

Spanish premium risk is worse than the Italian and its data are the worst in the euro zone, leaving the country on the first line of risk. There is no great ideological debate or a change of priorities. The truth is that money is limited and general cuts are a must. This requires less rethoric and more hard prose, without bothering with the niceties.

Be the first to comment on "Spain’s government has no time to be nice: cuts aren’t, but must be done"