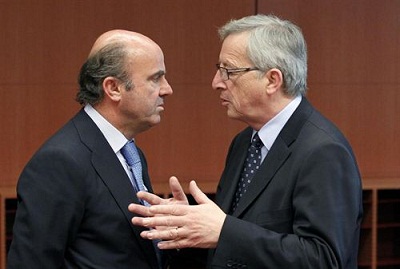 By Julia Pastor, in Madrid | The Spanish minister for the Economy Luis de Guindos finally released Monday the letter addressed to the Eurogroup president Jean-Claude Juncker with the aim of officially requiring financial assistance to recapitalise troubled national banks. His words have taken the front pages of all the Spanish media.

According to Europa Press, the letter begins with this paragraph:

“I have the honour of writing to you in the name of the Spanish government to make a formal request for financial assistance for the recapitalisation of the Spanish financial entities that may require it.”

De Guindos remarks that the aid package is within the terms agreed, only for financial entities recapitalisation, and mentions that the instrument chosen to fulfill that assistance will consider the different available possibilities at this moment as well as those which could be decided in the future.

The minister affirms in the letter that the Spanish cabinet values

What the letter does not specifies is the total amount that Spain will require in the end. Seemingly, this amount will be fixed once negotiations finish. Luis de Guindos expects the loan to be long term, over 15 years, having a grace period between 5 and 10 years, as well as interest rates ranging between 3%- 4%.

Oliver Wyman and Roland Berger audists results published last week showed that Spanish banks’capital needs could reach up to €62 billion in the worst scenario. According to JP Morgan’s analyst Marta Íñiguez, the terms and details of the bailout agreement may be dissappointing for the foll

“ Firstly, a minimum core tier I of 6% is very low: the government will probably request for a higher amount on the grounds of a 7%-9% rate, which will make capital needs over €80 billion.

“Secondly, giving the banks nine months to be recapitalised seems to be a long time and will not help to bring confidence sentiment back.” Finally, Íñiguez believes that “markets would not accept easily the fact of not including haircuts in sovereing bonds portfolios.”

Olli Rehn, European commissioner for economic affairs, said in a public reply to the letter that the European Commission itself will fill the details about the exact figure of money that will be handed to Spain's banks.

“Following this request, I have instructed our staff to step up their work to provide a clear assessment of the sector and its needs,” Rehn has declared, “as well as a proposal for the necessary policy conditionality that shall accompany the assistance, in liaison with the staff of the ECB, EBA and the IMF.

Rehn added that conditions will apply to banks being recapitalised and to the Spanish financial sector as a whole, including its supervision and regulatory requirements. The European commissioner reminded the Spanish government about its austerity duties, too, as part of the accord, which suggests that there is a collateral national side to the banking bailout terms in spite of Madrid denial:

“I expect Spain to keep the same determination and the momentum in the reforms that can bring sustainable growth and more and better jobs, as well as to honour its commitments under the excessive deficit procedure. Indeed there cannot be sustainable growth without sustainable public finances, both at national and subnational levels. Progress in these areas will be closely and regularly reviewed in parallel to the financial assistance.”